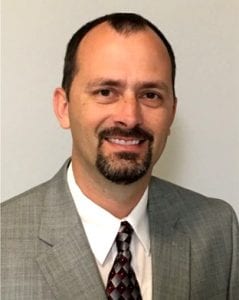 During the July 21, 2020 meeting, the Lexington County School District One Board of Trustees approved the promotion of Rodney D. Craps to operations coordinator. Rodney comes to Central Services from Gilbert High School where he served as assistant principal.

An educator with 19 years of experience, Craps began his career as a math teacher at Brookland-Cayce High School in Lexington School District Two in 2001. He joined the Lexington District One family in 2004 as a math teacher at the alternative learning center. In 2008, he moved to Gilbert High School where he taught math for nine years. He also coached various sports throughout his career, including basketball, football, golf and softball.

During his time at GHS, Craps was a University of South Carolina Noyce Fellow as part of the South Carolina Science and Mathematics Teacher Leader program. He mentored student teachers and assisted in the creation of math curriculum. In 2017, he was promoted to assistant principal at GHS. In this role, he oversaw the development of the master schedule, coached and evaluated teachers, coordinated student transportation, analyzed school data, worked with students on behavior and assisted with professional development.

A 1991 graduate of GHS, Craps earned an Associate of Science in electronics engineering technology from Midlands Technology College in 1995. He also earned a Bachelor of Science in mathematics, a Master of Teaching in secondary mathematics and a Master of Educational Administration from the University of South Carolina.