S.C. Ports Authority’s long-term planning for infrastructure and business has prepared the port to thrive for years to come as it pushes through current economic challenges.

“We are in the final year of a six-year capital improvement plan,” S.C. Ports Authority President and CEO Jim Newsome said. “We are preparing for our major infrastructure projects to come online in 2021, while also continuing to ensure that our port works incredibly well. We have the best team in place to execute our goals.” 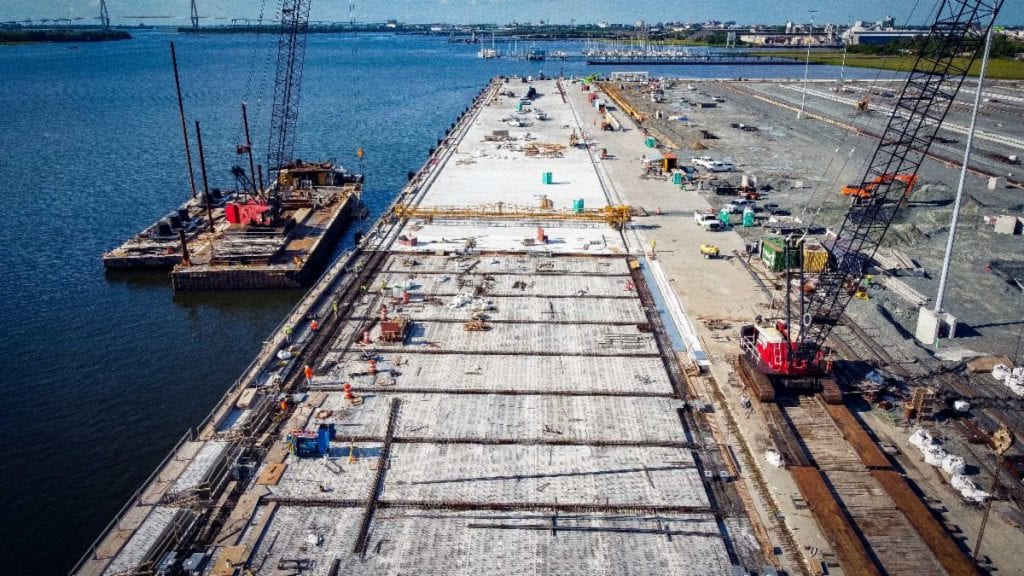 Work progresses on the 1,400-foot-wharf for Phase One of the Leatherman Terminal, the country’s newest container terminal, opening in March. (Photo/SCPA/Walter Lagarenne)

SCPA’s Board of Directors unanimously adopted a fiscal year 2021 financial plan during the June board meeting today. The plan projects that S.C. Ports will handle more than 1.24 million pier containers from July 1 through June 30, 2021. The financial plan includes $264.2 million in operating revenues, which is estimated to generate $81.4 million in operating cash flow.

The board also unanimously approved a $319 million capital spending plan for fiscal year 2021; most of those funds will be used to finish building Phase One of the Hugh K. Leatherman Terminal. The Leatherman Terminal, set to open in March, will be the first new container terminal in the U.S. since 2009.

“The opening of the Leatherman Terminal will mark an extension of the successful container operations concept at the Wando Terminal with the transfer of four large ship services to that location at its opening, while leveraging SCPA’s existing workforce,” Newsome said.

SCPA Board Chairman Bill Stern thanked SCPA’s teammates, board members and partners for their hard work and foresight.

“The financial plan for fiscal year 2021 reflects a very thoughtful approach to the current economic climate, while also focusing on key growth areas and a very exciting year ahead,” Stern said. “S.C. Ports looks forward to celebrating a 52-foot deep Charleston Harbor and the new Leatherman Terminal in 2021.”

S.C. Ports handled 169,705 twenty-foot equivalent container units (TEUs) at the Wando Welch and North Charleston container terminals in May. The Port of Charleston has handled nearly 2.2 million TEUs thus far in fiscal year 2020, from July 2019 through May 30.

In May, S.C. Ports moved 97,966 pier containers, which measures the total number of boxes handled. This brings the fiscal-year-to-date total of pier containers to 1.23 million.

Volumes remained steady for the first 11 months of fiscal year 2020 compared to the year prior. May volumes were down year-over-year due to COVID-19 disrupting global supply chains and temporarily halting operations for many businesses and manufacturers.

“We were on track for another record fiscal year until the pandemic happened,” Newsome said. “Nevertheless, ports are a long-term business requiring long-term planning. We have great fundamentals as a growing port in the Southeast. We will continue to thrive. Our future is very bright.”

S.C. Ports has notably continued to operate normally without any interruptions to gate hours, services, terminal operations or workforce.

“The S.C. Ports team and entire maritime community has worked tirelessly during the pandemic to keep freight moving, offering excellent service to our customers and ensuring the timely delivery of vital goods to communities and businesses,” S.C. Ports Authority COO Barbara Melvin said. “We are deeply grateful to all of our teammates and partners who work so hard to keep the supply chains fluid.”

Construction of the impressive Leatherman Terminal is progressing well for its March 2021 opening. Phase One will have a 1,400-foot-wharf, five ship-to-shore cranes with 169 feet of lift height, 25 hybrid rubber-tiered gantry cranes, and the ability to handle 19,000-TEU vessels.

These infrastructure projects support S.C. Ports’ efforts to diversify and grow its cargo base, such as First Solar’s recent announcement to bring up to 7,000 containers per year through the Port of Charleston and Inland Port Greer.

“In the face of great economic challenges, S.C. Ports is maintaining excellent operations and attracting cargo to the Port of Charleston,” Newsome said. “As a world-class port located in the booming Southeast, we plan to continue recruiting and supporting business to enable future investment, jobs and growth in South Carolina.”

South Carolina Ports Authority (SCPA), established by the state’s General Assembly in 1942, owns and operates public seaport and intermodal facilities in Charleston, Dillon, Georgetown and Greer. As an economic development engine for the state, Port operations facilitate 225,000 statewide jobs and generate nearly $63.4 billion in annual economic activity. SCPA is soon to be home to the deepest harbor on the U.S. East Coast at 52 feet, and the Port is an industry leader in delivering speed-to-market, seamless processes and flexibility to ensure reliable operations, big ship handling, efficient market reach and environmental responsibility. For more information on SCPA, please visit www.scspa.com