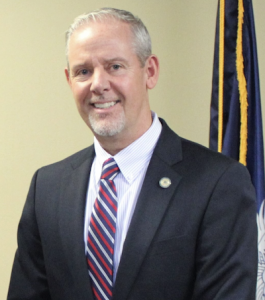 SCDPPPS has an office in every county in South Carolina. Gambrell will oversee those 509 staff mem- bers who supervise over 22,000 offenders. In July 2018, SCDPPPS became the first probation agency in the nation to achieve national accreditation through the Commission on Accreditation for Law En- forcement Agencies, Inc. (CALEA).

“I am truly humbled by this appointment. Working for SCDPPPS has not just been a job for me. It has been a fulfilling and enjoyable career. Even after 30 years, I still get excited about what our Depart- ment does for those people that struggle with many issues in life.”

Chad Gambrell has been employed with the Department for over 30 years. He proudly began his ca- reer in Laurens County as a Caseload Agent, later becoming the Court Coordinator and then Team Leader. Gambrell was further promoted to Assistant Agent-in-Charge of Spartanburg County, Agent- in-Charge of Laurens and Greenwood Counties, and was most recently the Agent-in-Charge of Green- ville County.

Gambrell has served on several major committees over the years which include the Sex Offender Management Committee (2005), Sentencing Reform Act Committee (2009), SC Probation & Parole Association Board (2011) and the Administrative Hearing Review Task Force (2013).

Gambrell has received the following awards during his career with the Department: 2008 Supervisor of the Year Award for the Upstate; 2014 Supervisor of the Year Award (Statewide); and 2019 Direc- tor’s Award (Strategic Planning Committee). Gambrell has a Bachelor Degree in criminal justice from The University of South Carolina. He is married to Kristy (Young) Gambrell, who is employed as the Director of Primary Care Service with Self Regional. They have two children, Mason-Paige and Trenton, and they reside in Clinton, SC.

The mission of SCDPPPS is to prepare offenders under supervision toward becoming productive mem- bers of the community; to provide assistance to the victims of crimes, the courts and the Parole Board; and to protect public trust and safety.