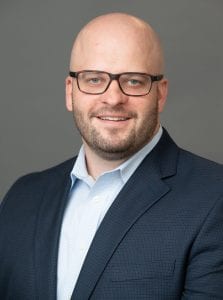 The South Carolina Research Authority (SCRA) has announced that Grayson Dorr, Investment Finance Manager, is part of the prestigious Charleston Regional Business Journal (CRBJ) Forty Under 40 Class of 2020. This elite 40 is comprised of people under the age of 40 who have excelled in the professional arena, and in the local community.

Dorr has been with SCRA for two and a half years and manages funding and financial transactions between SCRA and its client companies, as well as market-driven research projects. When CRBJ asked Dorr what made him choose his profession, he answered, “I have dedicated my career toward working with the state of South Carolina in various capacities. From the beginning, I always had an interest in economic development and desire to work in that field. It is rewarding now to support entrepreneurs in my current role, helping bring jobs and additional capital to the state.” The advice he gave to the next generation was to, “Be present and break away from the fast-growing norm of communicating behind the screen/phone. Never underestimate the power of networking and a handshake.”

A native of the Charleston area, Dorr earned his bachelor’s degree in business and management information systems from The Citadel Military College of South Carolina and his M.B.A. from Charleston Southern University. He is based in SCRA’s Summerville office.

Grayson Dorr will be honored during a virtual event on Wednesday, August 26.

SCRA is a state-chartered organization that fuels job creation and grows South Carolina’s innovation economy. Through SCRA’s programs, multi-institutional, market-driven research projects are funded, and early-stage companies are provided mentoring and grants, and may be eligible for investments from SCRA’s investment affiliate, SC Launch, Inc.