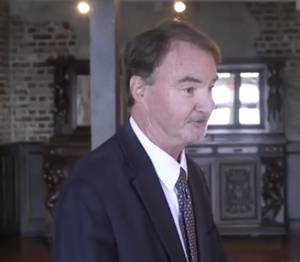 Dr. Robert “Casey” Fitts, a general surgeon with a passion for treating the underprivileged and a lifetime of service proving it, was awarded the State of South Carolina’s highest civilian honor for his extraordinary work in the community.

Sen. Tim Scott delivered Dr. Fitts with the Order of the Palmetto Monday during an intimate ceremony at the Historic Rice Mill, calling Dr. Fitts a “powerful panacea” for standing in the gap for those in poverty.

“You just can’t hear these types of stories and do nothing,” Sen. Scott said about giving the award to Dr. Fitts. “You have to do everything you can because he did everything he could.”

“The most impactful thing that I know about Dr. Fitts is he restores dignity by the way he treats you,” said Dr. Tim Scott, who attended the ceremony with his mother, Frances Scott, who worked with Dr. Fitts. “It’s people like Dr. Fitts who make this lottery ticket of American citizenship so incredibly valuable.”

In 2001, after 10 years of building a busy practice in general surgery, Dr. Fitts took a year leave of absence to develop a community program which would provide a medical home spanning all aspects of healthcare for these patients. He educated himself in the rules and regulations of Medicaid, Medicare and the South Carolina Department of Insurance. He brought together the four Tri-County hospital systems, charity clinics, and nearly 1,600 local physicians and secured $12 million in funding to create Tri-County Project Care. He rallied his fellow physicians to accept significantly discounted rates to care for this uninsured population.

After Tri-County Project Care had been established, he returned to his practice and continued to grow the program, which spanned 12 years and covered thousands of South Carolinians and resulted in sharp drops in patient cost and ER utilization.

During today’s ceremony, Dr. Fitts received a standing ovation from his former colleagues and loved ones.

“While access to healthcare continues to be a nationwide problem, pilot programs like Dr. Fitts’ are templates for providing successful healthcare to all,” Dr. Lucas said. “In all his years of general surgery practice, being able to serve and help all patients, no matter their ability to pay, was paramount to him. To this day, Dr. Casey Fitts is known as a friend and humanitarian to all who have met him.”