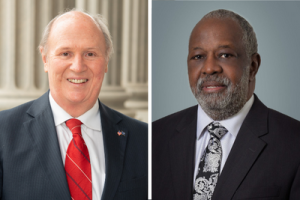 The awards recognize outstanding, principled leadership in South Carolina and will be given at the Riley-Wilkins OneSouthCarolina Legislative and Civic Leadership Awards dinner on January 10 in Columbia.

“In a time when bipartisanship feels elusive, it’s more important than ever for the good of our state and its residents that we put aside differences to get things done and to honor those leading the way,” said Dr. Don Gordon, executive director of the Riley Institute. “The awards celebration embodies the cooperative spirit that has defined the leadership styles of Dick Riley, a Democrat, and David Wilkins, a Republican.”

Senator Thomas Alexander has served at the Statehouse since 1987, first as a representative and then as a senator, and in 2021 was elected Senate president with bipartisan support. Alexander has led efforts and worked across the aisle on workforce development, equitable distribution of pandemic relief funds, and the vital expansion of broadband internet into rural and underserved areas in South Carolina.

Roland Gardner, recipient of the civic leadership award, improved the lives of residents of the Lowcountry and South Carolina by increasing access to quality healthcare during his 41 years as CEO of Beaufort-Jasper-Hampton Comprehensive Health Services (BJHCHS) until his retirement in May 2022. Under Gardner’s leadership, BJHCHS grew from a start-up nonprofit into a multi-million-dollar corporation that spans three counties and serves over 17,000 patients.

The January 10 event at the Columbia Metropolitan Convention Center begins with a cocktail reception for all registered attendees at 6 p.m. The dinner and awards presentation will take place at 7 p.m. with a dessert reception to follow. Tickets are $150 each and may be purchased by visiting furman.edu/onesouthcarolina or calling 864.235.8330.