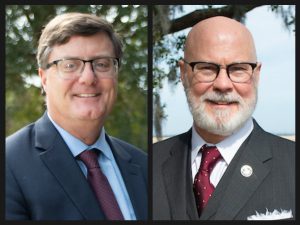 The initial blocks of a sensor-laden “Smart Reef” system capable of gathering critical marine and weather information will be installed with the aid of boats and SCUBA divers off the S.C. coast near Little River Inlet, Oct. 16. The high-tech undersea information-collection system was developed by Coastal Carolina University’s (CCU) Burroughs and Chapin Center for Marine and Wetland Studies in partnership with the gubernatorially established S.C. Floodwater Commission.

The system – a series of sizable concrete blocks housing environmental sensors – will be lowered onto and installed on the much larger Ron McManus Memorial Reef system, approximately five nautical miles from the south jetty at Little River inlet. The surface-to-reef installation will be the first of three phases which will enable scientists and researchers at CCU to collect wave, storm, and other data in real-time in order to facilitate better modeling as regards storm impacts, flooding, surge measurement, and various threats to the coast and the economies impacted by all.

Tom Mullikin, chair of the S.C. Floodwater Commission, agrees. “This partnership is but another means by which we advance the objectives of the Floodwater Commission and all of those involved in terms of gathering information in order that our state’s engineers and environmental experts develop new and better ways of protecting the lives and property of all South Carolinians,” said Mullikin.

Joining Gayes and Mullikin (both pictured) for the installation will be United States Congressman Tom Rice; S.C. Supreme Court Justice John Few; S.C. Senator Stephen Goldfinch; and Jonathan Zucker, board chairman of the S.C. Aquarium, among other representatives and officials with CCU and the S.C. Floodwater Commission, including several CCU students.

Data generated by the Smart Reef system will become publicly available as a part of
the South East Atlantic (SEA) Econet; a system of 100 weather stations across the Southeastern U.S. which feeds the National Weather Service’s modeling system. The block-lowering project will be directed from CCU’s research vessel along with assisting boats powered by Yamaha outboards. Additional partners include Global Eco Adventures, Yamaha Rightwaters™, and McAlister Communications.

The reef site is one of 43 artificial reef sites managed by the S.C. Dept. of Natural Resources’ Artificial Reef Program.