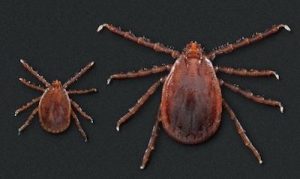 South Carolina public health and livestock officials have recently identified a large population of Asian longhorned ticks infesting a pasture at a cattle farm in York County. This invasive species of tick is not commonly found in the United States, and bites from these ticks have caused severe illnesses in people, animals and livestock in other countries.

As of June 2022, the U.S. Department of Agriculture (USDA) reports Asian longhorned ticks were first identified in the United States in 2010 and have since been found in 17 states. In South Carolina, a small number of these ticks were identified in 2020 on shelter dogs in Lancaster and Pickens counties.

The Asian longhorned ticks in South Carolina have been identified through the state’s tick surveillance program – a collaborative effort between DHEC, the University of South Carolina Arnold School of Public Health and Clemson University Livestock Poultry Health.

“While no documented cases of diseases such as Lyme disease, Rocky Mountain spotted fever, or anaplasmosis have been reported in the United States due to bites from Asian longhorned ticks, the ability of this tick species to spread diseases that can make people and animals ill is a concern,” said Dr. Chris Evans, State Public Health Entomologist with DHEC’s Bureau of Environmental Health Services.“However, more research is needed in the United States to better understand what diseases the Asian longhorned tick can spread and to what degree they are a health risk to people, livestock, and other animals. The ability of this tick species to increase its populations very quickly, leading to large infestations in a short amount of time, is also concerning.”

Unlike other ticks, a single female Asian longhorned tick can produce 1,000 to 2,000 eggs at a time without mating. This means a single animal could host hundreds or thousands of ticks.

Dr. Michael Neault, South Carolina State Veterinarian and Director of Clemson University’s Livestock Poultry Health Department, advises that animal owners consult with their veterinarian about the use of products approved in the United States for other tick species that are found to be effective in treating animals with the Asian longhorned tick.

“Companion animal and livestock owners should discuss with their veterinarians about using appropriate tick preventatives for their animals,” Neault said. “Livestock owners especially should be aware that these ticks can carry the parasite Theileria. In Virginia, they already have spread this infection in sheep, and it also may spread to cattle. In other countries, the Asian longhorned tick has spread anaplasmosis among livestock, so producers may want to take preventative measures for their herds.”

Asian longhorned ticks are light brown in color and tiny. Because of their small size and quick movement, they are difficult to detect. These ticks can feed on any animal but are most commonly found on livestock, dogs and humans.

“The establishment of the Asian longhorned tick has real animal and human health concerns,” said Dr. Melissa Nolan, assistant professor of epidemiology in the Arnold School of Public Health and director for the UofSC Laboratory of Vector-Borne and Zoonotic Diseases. “We are asking the public to send us any ticks they encounter in their everyday lives to help us track and monitor its spread. With local help, I believe we can slow the spread of this tick in our state.”

A recent $585,000 grant awarded to Dr. Nolan by the U.S. Centers for Disease Control and Prevention (CDC) will enable the South Carolina tick surveillance program to expand its efforts. The five-year project will convene experts from nearly a dozen locations in nine key states to form the CDC Southeastern Center of Excellence in Vector-Borne Diseases – a collective effort that will enhance the identification and monitoring of tick migration and hotspots, including invasive species such as the Asian longhorned tick.

To participate in the tick surveillance project, carefully collect a tick by using gloved hands, tweezers or another tool and send collected ticks, alive or dead, in a puncture-resistant sealable vial or zippered storage bag to Laboratory of Vector-Borne and Zoonotic Diseases, 921 Assembly Street #417A Columbia, SC 29201. Please include:

Clemson University recommends that livestock owners work with their veterinarian and extension agent to develop a comprehensive tick management plan that includes using approved tick preventatives that can be applied to horses and livestock and following procedures that reduce ticks in pastures.