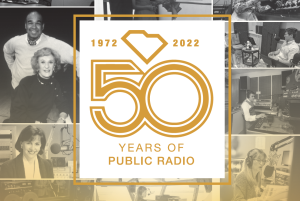 The Golden Jubilee began with the planting of a commemorative tree at USC Upstate in Spartanburg, SC. The Amber Glow Dawn Redwood, developed and propagated in South Carolina, will serve to honor those that helped impact SC Public Radio over the past 50 years and symbolize growth for the network in the future.

Over the next year, the network will feature programming that highlights important moments in SC Public Radio history and host several community events.

Today, SC Public Radio reaches more than 300,000 listeners each week, helping residents across the state stay informed by providing the latest local and national news, as well as a variety of music programming.

SCETV currently has a regional studio located on the campus of USC Upstate. This partnership began when ETV Upstate first signed on the air in 1980 and continues to produce local programming and engage with the Upstate community.

For more information on the Golden Jubilee and to explore the history of SC Public Radio, visit www.southcarolinapublicradio.org.

“SCETV is proud to celebrate the impact that SC Public Radio has made over the past 50 years. We hope this Golden Jubilee will show South Carolinians the importance of providing news and music through the power of public radio and look to the future as we embark on the next 50 years.” – SCETV President and CEO Anthony Padgett

“Engaging with our communities through events and programming is core to the mission of SC Public Radio. The network will be showcasing prominent moments from the past 50 years through on-air programming and hosting a number of local community events throughout the year to celebrate our Golden Jubilee.” – Director of SC Public Radio Sean Birch