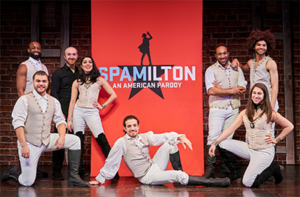 The SPAMILTON: An American Parody tour launched on Dec. 20, 2018 and is now playing several multi-week engagements in its first season. The show will play a limited three-week run in the Peace Center’s Gunter Theatre, Dec. 17, 2019 – Jan. 5, 2020.

Created by Gerard Alessandrini, the comic mastermind behind the long-running hit Forbidden Broadway, and performed by a versatile cast of seven, SPAMILTON is a side-splitting new musical parody. After tearing it up in New York, Chicago, Los Angeles and London, SPAMILTON: An American Parody will stage a singing, dancing, comedy revolution in Greenville!

Marilyn Stasio of Variety mused, “Hip-hop, Broadway showtunes, Viennese waltzes — is there anything this guy can’t write? No, not Hamilton creator Lin-Manuel Miranda, but Gerard Alessandrini, whose ingenious parody SPAMILTON simultaneously salutes and sends up Miranda and his signature musical.” Ben Brantley of The New York Times said, “This smart, silly, and often convulsively funny thesis, performed by a motor-mouthed cast that is fluent in many tongues, is the work of that eminent specialist in Broadway anatomy, pathology, and gossip, Gerard Alessandrini.”

SPAMILTON: An American Parody will play a limited three-week engagement in the Peace Center’s Gunter Theatre, Dec. 17, 2019 – Jan. 5, 2020. A performance schedule is available at peacecenter.org.

Tickets are $57 and may be purchased by calling 864.467.3000 or 800.888.7768, in person at the Peace Center Box Office or online at peacecenter.org. Tickets go on sale to Broadway season ticket holders and Peacekeepers beginning now and go on sale to the public on Friday, Sept. 13, at 10 a.m. Service fees will apply to phone and online sales.

For more information about the Peace Center and its upcoming events, visit peacecenter.org.