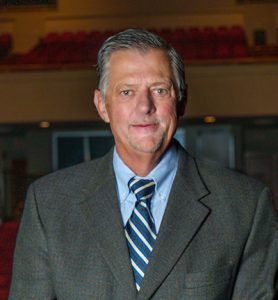 “Roger’s extensive background in the management of public assembly venues, along with his connections in the concert and entertainment industries, make him a great fit for this position,” said Blackford. “His work as a consultant for the Auditorium over the past few months has demonstrated to the Commission what we believe the Auditorium can become under his leadership. We are excited about the future of the Auditorium and are confident in Roger’s ability to lead the organization into this new chapter in the history of this iconic venue.”

“I am honored to be the new CEO and the successor of an incredible leader, Steve Jones, who served as General Manager of the Auditorium for 35 years,” said Newton. “The Commission board members are engaged, enthusiastic, and excited about the future of the Auditorium. I share in their vision and look forward to working with each of them, the Auditorium staff, and the Spartanburg community to grow the number of events and increase activity at the Auditorium. Spartanburg is experiencing tremendous growth, and the Auditorium is well-positioned to work hand in hand with community leaders to bring more events and add to the quality of life of this great city,” added Newton.

Newton will oversee all aspects of the management and operation of the Auditorium, including but not limited to managing an annual budget, supervising staff, facilitating capital improvements, and managing improvement projects. Newton will also be responsible for soliciting and booking events at the Auditorium, marketing, sponsorships, and ticketing, and maintaining relationships with media outlets, community leaders, and government officials.

About the Spartanburg Memorial Auditorium

The Spartanburg Memorial Auditorium is a world-class performing arts venue located in downtown Spartanburg, S.C. Established in 1951, the Auditorium includes a 3,244-seat theatre with one of the largest stages in the Southeast and an events center with 13,638 SF of exhibit space. Year-round performances showcase the best in Broadway, comedy acts, family programs, and musical entertainment. The Spartanburg Memorial Auditorium fulfills its mission of building community and creating connections by partnering with local organizations and serving as a gathering place for all. To learn more, visit crowdpleaser.com