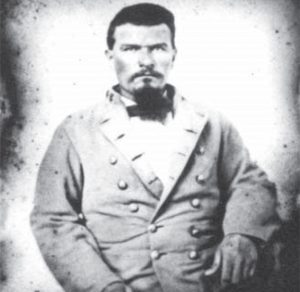 Mike Rucker is a Virginian, and while in high school in Fredericksburg, he and his brother operated a business guiding tours of the surrounding historic sites.

The area offered a wealth of opportunity. “There were more Civil War battlefields than you can shake a stick at,” he recalls.
In fact, most people seemed to think the whole war happened in northern Virginia, and no history buff needed to pay attention to the rest of the country. Like most, Rucker says, he knew almost nothing about the Western theater.

He saw that as a problem, one he set out to address in his book, The Meanest and ‘Damnest’ Job: Being the Civil War Exploits and Civilian Accomplishments of Colonel Edmund Winchester Rucker During and After the War. Rucker – Mike, not Edmund – will talk about what he learned in researching that book at noon on Friday, Dec. 10, in connection with the South Carolina Confederate Relic Room and Military Museum in Columbia. The lecture will be part of the museum’s monthly Lunch and Learn series.

He will speak via Zoom from his home in Illinois. However, the lecture will be hosted from the education room at the museum, so anyone wanting to attend has the choice of coming to the Relic Room itself – where there will be autographed copies of the author’s books available – or participating from home via live stream: The link is https://us02web.zoom.us/j/81206298448?pwd=VlIwY3lhRWZHbG84Y21seUl0d1BYZz09. The meeting ID is 812 0629 8448, and the password is relicroom.

Rucker will tell those listening that the western war was completely different from that in the east, with its familiar epic battles and legendary generals. But it was important. After all, that’s where the North started winning significant fights – starting with the one at Fort Donelson, which helped set new expectations for the rest of the conflict.

And instead of telling the story through the exploits of such giants as Lee and Jackson, Rucker has chosen to focus upon a somewhat more obscure figure, his distant kinsman Edmund. But though he is less well known, Edmund had a remarkable war record.

Edmund Rucker was the grandson of Gen. James Winchester, a veteran of the Revolutionary War and the War of 1812 who was also the speaker’s direct ancestor. But he entered the war as a private, joining a Tennessee company of sappers and miners – a natural occupation, since in civilian life he had served the city of Memphis as an engineer. But that was just a starting point. He would later join 1st Tennessee Heavy Artillery as a lieutenant, fighting in the Battle of Island Number Ten on the Mississippi River.

Then, as a major, he was assigned to enforce Confederate conscription laws in pro-Union East Tennessee. He drafted a lot of very reluctant recruits who would be known as “handcuffed volunteers.” That’s the job he would refer to as the “damnest.” Then he would become a cavalry colonel, and lead his battalion into combat in Pegram’s Kentucky Raid, the Battle of Chickamauga and the Chattanooga Campaign. He later served under, and became close to, Nathan Bedford Forrest.

Rucker was appointed acting brigadier general, but his commission was never confirmed by the Confederate Congress. He went on to be wounded – losing an arm – and captured at the Battle of Nashville. He was liberated through a prisoner exchange, and was back with Forrest when the unit surrendered on May 9, 1865.

How did he rise so fast through so many widely different roles? “He just proved himself time and time again,” says Mike Rucker.

After the war, Rucker and Forrest became business partners in a railroad-building project. Rucker did well from this venture and became one of the wealthiest early entrepreneurs in Birmingham. Fort Rucker, Alabama, was named for him.

After receiving an engineering degree from Virginia Tech in 1963, Mike Rucker joined Caterpillar Tractor Co. in Peoria, Illinois. He retired after working for the company for 40 years.

He researched the subject matter for his book on Edmund Rucker for fifteen years before submitting it for publication. He is also the author of 21 children’s books and another Civil War book, Bridge Burner, about another Rucker.

But that one was a partisan who supported the Union.