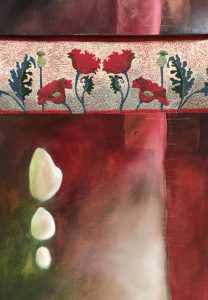 From never-before-seen compositions to works spanning over two decades, the artwork of USC Lancaster Distinguished Professor Emerita of Art and Art History Fran Gardner will be on display at USCL’s main campus and Native American Studies Center this April.

The retrospective “Over Time” will open to the public at the Native American Studies Center on Tuesday, April 5, featuring small works of stitchery and painting by the award-winning fiber and mixed media artist. The exhibit includes artwork from the early 2000s to works completed as recently as a few months ago.

“Polyhymnia Conjures Language,” a mixed media piece by artist Fran Gardner, will appear as part of the exhibit “Over Time,” opening Tuesday, April 5 at the Native American Studies Center.

“There likely would be no Native American Studies Center if it weren’t for Fran Gardner,” said Director of Native American Studies Dr. Stephen Criswell. “She was instrumental in getting this project off the ground and has been a longtime supporter of and contributor to our work. It is fitting her work be featured in the Center. Not to mention, she makes incredible art!”

As the exhibit opens at the Center, a companion exhibit entitled “COVID Diary” displays some of Gardner’s never-before-seen pieces on USCL’s campus in the Bradley Arts & Sciences Building. The exhibit chronicles the work Gardner created as pandemic lockdowns began in March 2020.

On Thursday, April 7 from 5-7 p.m., the Native American Studies Center is hosting a special reception in honor of the new exhibits, where Gardner will give a talk discussing her work at 6 p.m. In addition to being presented in person, the talk also will be presented via Zoom. Anyone wishing to attend the virtual program may register at the link available on any of the Center’s social media platforms or on the Center’s website at www.sc.edu/Lancaster/NAS.