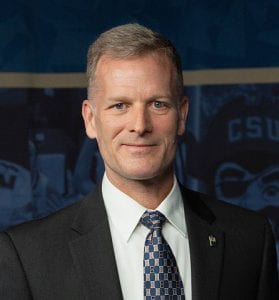 Dondi E. Costin, PhD, is the President of Charleston Southern University, and elected to the Tri-County Cradle to Career Collaborative board of Directors for a three-year term. Dr. Costin has a track record in key leadership positions with the U.S. Air Force, having obtained the rank of Major General in his 32 years of commissioned service. He most recently served at The Pentagon as Air Force Chief of Chaplains. As Chief of Chaplains, he was the senior pastor for more than 664,000 active-duty, Guard, Reserve and civilian forces serving in the United States and overseas, and led 2,000 chaplains and chaplain assistants from the Air Force Chaplains Corps.

Dr. Costin grew up in Wilmington, N.C. and graduated from The United States Air Force Academy, retiring from the Air Force before assuming the CSU presidency. As a decorated combat veteran, he deployed in support of numerous contingency and humanitarian relief operations across the globe and previously served as a senior chaplain for Air Force operations both in the Pacific and the Middle East. His military decorations include the Legion of Merit and the Bronze Star Medal. In addition to a bachelor’s degree in operations research, Dr. Costin holds five master’s degrees, a Doctor of Ministry degree, and a PhD in organizational leadership.

Dr. Costin currently lives in Charleston with his wife, Vickey.