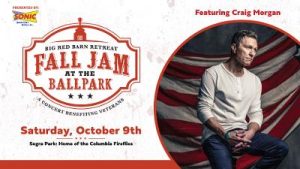 The Big Red Barn Retreat is to host to the annual Fall Jam at the Ballpark concert benefiting veterans. The concert, headlined by country music star Craig Morgan and his band, will be held on Saturday, October 9, 2021 at Segra Park: Home of the Columbia Fireflies. Opening acts will be announced soon.

Fall Jam at the Ballpark 2021 will be the most patriotic event of the year in the Midlands, honoring our community’s veterans, active-duty service members, first responders and their families. Craig Morgan embodies the sentiment we try to share every day at The BRBR, which is the power and ability to turn struggle into profound growth. We are honored to have him with us for this event and for the support he shows for our military and first responder community. The Big Red Barn Retreat (BRBR) is extremely excited to be hosting the event at Segra Park: Home of the Columbia Fireflies, where there isn’t a bad seat in the house and is located in the heart of Columbia’s BullStreet District.

General admission tickets are $25, $15 for military in advance and $35 at the gate. Club level reserved seats are $40 in advance, $50 at the gate and include wait service for food and beverage and access to the air-conditioned Club Lounge with a full bar and restrooms. General admission tickets go on sale June 4, 2021 online at thebigredbarnretreat.org/fall-jam and at the Segra Park Box Office at 1640 Freed Street, Columbia, 29201. A limited number of luxury suites which include 20 tickets, 4 parking passes and amenities are also available. Club level reserved seats and luxury suites may be purchased in person at the Segra Park Box Office or by calling the Segra Park Box Office at 803-726-4487. The event will follow Segra Park’s cashless and clear bag policies. Parking for the event will be $5 and will follow the parking policies in place for Columbia Fireflies games. Parking will also follow Segra Park’s cashless policy. A parking map can be found online here.

All proceeds will benefit the many programs and services The BRBR offers to our struggling military and first responder community at no cost, including the widely studied and renowned Warrior PATHH program. For more information on the services and programs The BRBR provide, visit thebigredbarnretreat.org.

A multi-faceted entertainer, Craig Morgan has made a name for himself as a country music icon, TV personality, celebrated outdoorsman and patriotic Army veteran. One of country music’s best-loved artists, Morgan has charted 25 songs on Billboard and thrills massive crowds with signature hits including “Bonfire,” Almost Home,” “Redneck Yacht Club,” “International Harvester,” “This Ole Boy,” “Wake Up Loving You,” and the four week No. 1, “That’s What I Love About Sunday.” Most recently, Morgan released his first new music in over three years, the faith-filled tribute to his son Jerry — “The Father, My Son, And The Holy Ghost.”

Craig received one of country music’s highest honors when he was inducted as a member of the Grand Ole Opry in 2008. Prior to becoming a country music star and TV sensation, Morgan spent seventeen years serving our country in the Army and Army Reserves. Morgan remains an avid supporter of America’s military personnel and has made 16 overseas trips to perform for our troops. He is a recipient of the 2006 USO Merit Award and in 2018 was awarded the Army’s Outstanding Civilian Service Medal, one of the highest awards the Department of the Army can bestow upon a civilian, in recognition of his significant dedication to our military men and women around the world.