Long ago it was, in the late 1980s. I was in a hurry to get back to South Carolina. Thus did I take Georgia Highway 22, known also as the Crawfordville Road. I knew that road would take me to I-20 but it took me somewhere else—the past. I drove through farmland and wooded tracts and when I entered a place called Philomath, I knew at once it was an authentic place stranded in time.

Then I passed a house like no other. Four stout cedar trees bereft of limbs served as columns. I could never forget this house and several times over the next thirty years I’d go out of my way to see the unusual home. Then the day came, a Sunday, when I went to photograph it. 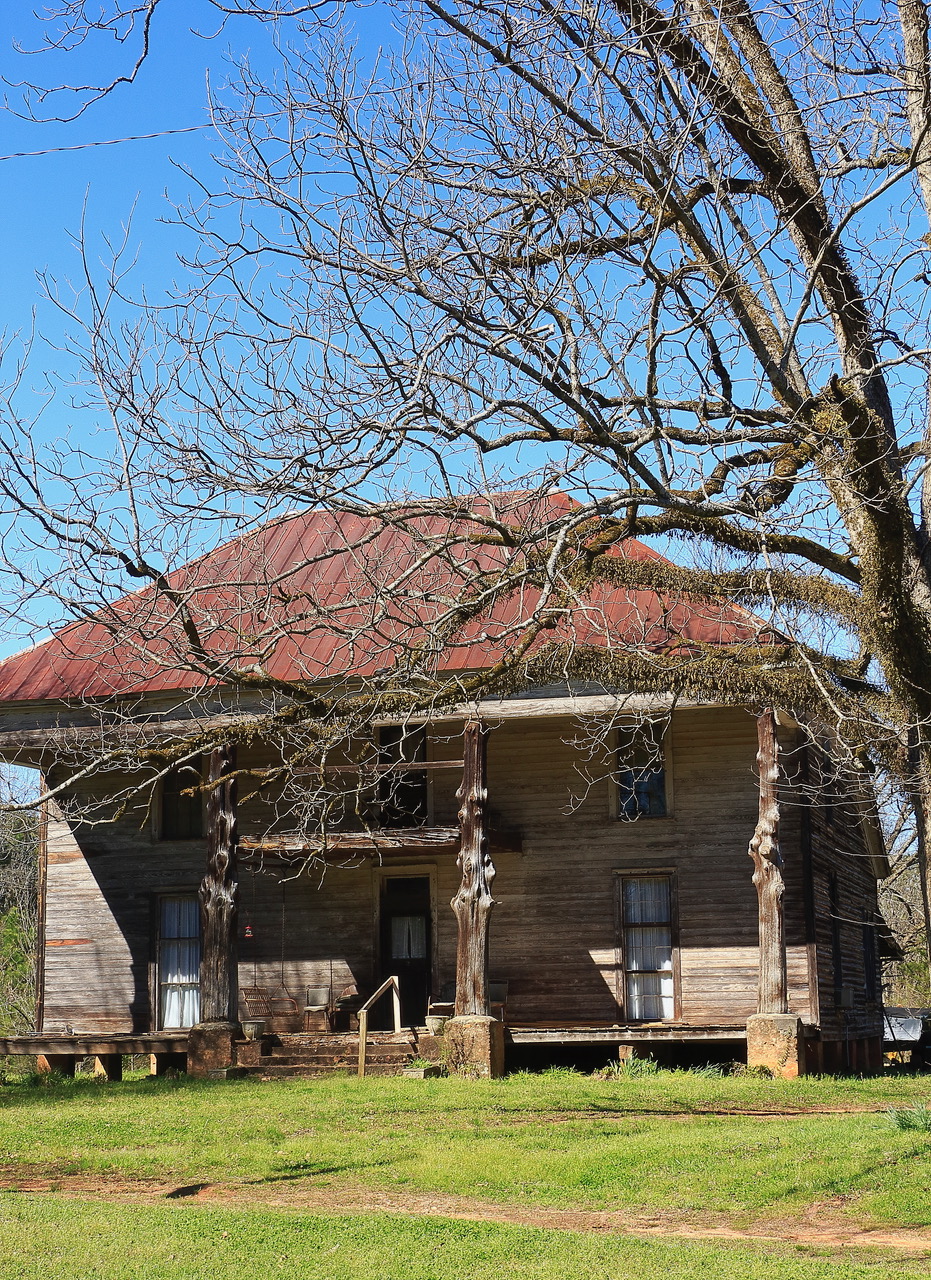 These stately cedars had held up the roof for 100 years.

The old home stood in Philomath, Georgia, a name that’s hard to forget. Phil-o-math. Three syllables that seem Biblical, and in fact King James himself penned a character, Philomathes, to debate arguments of whether the ancient religious concepts of witchcraft should be punished in a politically fueled Christian society, but that’s not Biblical. My friend and fellow author, Jodie Peeler, told me that R.E.M. mentioned Philomath in a song. “If you’re needing inspiration, Philomath is where I go.” That’s not Biblical either, but it’s true, or I wouldn’t be writing about the place would I.

Now, the fine home with the cedar columns you see in my photo. Thanks to Brian Brown’s “Vanishing Georgia” I learned that it’s the Bryan-Wolfe House. The old place came to be 100 years ago, and like Sir Elton’s song, It’s Still Standing. And what about Philomath, the unincorporated community in Oglethorpe County, Georgia? Well, to go there is to flee the present. You’ll see buildings of wood whose shape and construction come from the past. The Antebellum South comes to mind at once.

I cannot verify it but I heard this agrarian community was among the sites selected where the University of Georgia was to be. Athens, of course, won out.

William Bartram came through Philomath, and there’s a small building there known as the William Bartram Museum, seldom used unfortunately. I learned this thanks to a thesis Justin E. Courson wrote, “Preservation Planning For Philomath, Georgia” in 2010. Courson also wrote that President Woodrow Wilson traveled to Philomath as a boy when his father, Joseph Wilson, went there to preach at the request of the Philomath Church’s congregation. Courson suggests too that Philomath lore holds that Jefferson Davis dissolved the Confederacy from the balcony of The Globe, an antebellum home.

“Philomath.” The name sticks with you. It refers to the Love of Knowledge and a person who’s fond of studying and learning. So, what’s the morale of this column? When you’re young you breeze right through a fascinating place and pay it no heed. Then years later an unusual sight catches your attention and you slow down and want to learn more. And then on a Sunday when you’ve got time on your hands as well as a camera in your hands, you think, “I’m going to hit the road and photograph the cedars of Philomath.”

And I did. Before I go, let me encourage you to visit Brian Brown’s Vanishing Georgia website. Google it. Brian will, indeed, show you not just a vanishing Georgia, but a vanishing Southland as Georgialina and neighboring states continue to lose their old southern places.

An old house with rough-hewn cedars as columns. You just don’t come across that too often, not at all.