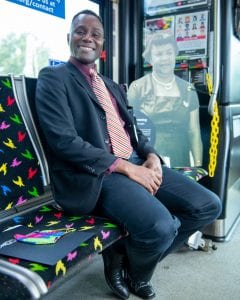 The Central Midlands Regional Transit Authority (The COMET), along with Columbia SC 63, Historic Columbia, Richland Library and Midlands area municipalities launched a tribute honoring local civil rights icon, Sarah Mae Flemming this morning at the Richland Library Eastover Branch, in The COMET’s new Park and Ride area. Attendees were directed to socially distance themselves and wear masks as they toured the bus and gathered in the lot. As part of the tribute, proclamations were read from the City of Columbia, the Town of Eastover and Richland County heralding June 22 as “Sarah Mae Flemming Day”.

The tribute, “Saving Sarah’s Seat” is the awareness campaign spearheaded by The COMET in recognition of the 66th anniversary of Flemming’s ride on a local bus and the landmark incident which was cited in the lawsuit that brought an end to the Montgomery Bus Boycott, made famous by civil rights activists Dr. Martin Luther King, Jr. and Rosa Parks. Sarah Mae Flemming’s likeness and her story will be present in a seat on every The COMET bus from today until August 22. Riders and the public are encouraged to learn about this pivotal time in history which occurred right here in the Midlands.

“Now, it is the turn of that local bus system to honor and respect Ms. Flemming for standing up for her rights as an American citizen,” said The COMET’s Executive Director/CEO, John Andoh. “The COMET will lead the way with this awareness campaign about her contributions to the Civil Rights Movement in our city, state and country.”

On June 22, 1954, Sarah Mae Flemming, a 20-year-old resident of Eastover, boarded a crowded bus operated by South Carolina Electric & Gas Company. When asked to leave her seat and move toward the rear, Flemming resisted racial custom by attempting to exit from the front of  the bus. The driver struck and ejected her from the bus on the corner of Main and Washington streets. The NAACP filed a lawsuit on her behalf, and in July 1955, the U.S. Fourth Circuit Court of Appeals ruled that the Brown desegregation mandate be applied to public transportation. This was the ruling cited in the lawsuit that ended the Montgomery Bus Boycott and led to the United States Supreme Court decision that declared segregation in public transit unconstitutional.

“Sarah Mae Flemming, who in every respect of the word, was just an average person,” said Columbia Mayor Steve Benjamin. “An average person who encountered some extraordinary circumstances and responded in a super extraordinary way.” “We have someone who made such a significant contribution to the course of American history,” Benjamin added.

During the month of June, water bills from the City of Columbia will have inserts highlighting Ms. Flemming’s story.

“Sarah Mae Flemming Brown’s story matters, and her remarkable history must be told. For too long her contributions to the Civil Rights Movement have been buried and obscured.  Although abused and ridiculed on a Columbia bus on June 22, 1954, she refused to be quiet. On the contrary, she raised her voice and spoke out.  Despite threats and fears, she and the NAACP fought back and challenged segregation and discrimination in the courts.  Today, we honor Mrs. Brown and countless others who dared to believe in freedom, justice, and equality,” said Dr. Bobby Donaldson Director, Center for Civil Rights History and Research, University of South Carolina/ Lead Scholar, Columbia SC 63. “We are delighted to partner with The COMET and look forward to future collaborations that highlight our city’s extraordinary history.”

Although formal planning for the campaign began back in January, the timing and intersection with the nation’s pulse was something that none of the organizers anticipated.

“The courageous actions of Sarah Mae Flemming changed the course of history in our community and across the country forever,” said Richland Library Executive Director Melanie Huggins. “We are proud to join The COMET, bringing attention to the racial injustices that she faced so many years ago and learning how we can work together to increase equity, inclusion and opportunity for all.”

The COMET is a service of the Central Midlands Regional Transit Authority and provides countywide public transit services on 34 fixed routes, five ReFlex services, vanpool service for commuters, subsidy programs with Uber and Lyft and DART for transportation to grocery stores and at night, ADA complementary paratransit service throughout Richland and portions of Lexington Counties and eight Blue Bike bikeshare stations in Downtown Columbia. The COMET transports approximately 2.8 million passenger trips a year on a fleet of more than 80 buses, vans and trolleys. Transit services are provided under contract with Transdev (until June 30, 2020), Enterprise Holdings, Lyft, Uber and Bewegen. For additional The COMET information, please call (803) 255-7100, TDD/TTY: 711 through the relay service, email: [email protected] or visit www.catchthecomet.org.