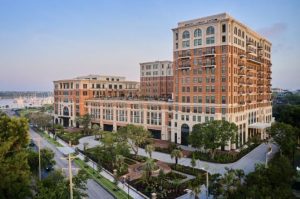 The Beach Company, in collaboration with partners Balfour Beatty, Antunovich Associates and LS3P, announced that The Jasper has earned the Associated Builders and Contractors’ Carolinas Eagle Award for General Contractor Project of the Year. The award was announced during the organization’s 2022 Excellence in Construction (EIC) Awards gala on November 10.

Setting the architectural standard for large buildings in Charleston’s historic district, The Jasper is a 12-story mixed-use building offering 219 for-rent multifamily units, in addition to AAA-office space and first-floor retail with an enclosed parking garage. Its massing and detailing seamlessly blend innovative design with the elegance of other cherished neoclassical structures found throughout Charleston. Coupled with top-of-the-line amenities and unmatched views, The Jasper is a one-of-a-kind legacy project.

“The Jasper is a remarkable skyline addition that brought together a best-in-class team in architecture, construction and development to create a crown jewel in the landscape of historic downtown Charleston, said David C. Burt, vice president of LS3P. “We are honored to receive this award from ABC Carolinas and work with a star-studded team to bring this project to life.”

Complementing its idyllic location in the historical and primarily residential neighborhood of downtown’s Harleston Village, the project was designed and constructed using materials and methods that harmonize well with the city’s renowned architecture. The building has a cast-in-place structural concrete frame and is enveloped by 1,600 architectural precast panels using thin-brick-clad concrete. Architectural Precast Concrete, a technique that had yet to be leveraged in a historical context in Charleston, allowed for the level of detail needed to embrace the city’s historical architecture while creating an opportunity for the future of historic Harleston Village.

The ABC Carolinas Chapter Excellence in Construction Awards is a yearly competition in which general and specialty contractors submit projects for recognition. The EIC program is the premier competition within the Carolinas construction community that recognizes outstanding projects ABC members have built. First place Eagle awards and runner-up Merit awards are presented in multiple categories in two divisions, general contractors and specialty contractors, along with a special Carolinas BIM award and a Design-Build award.