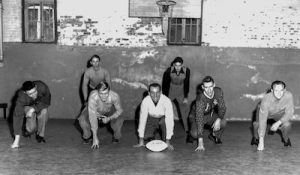 Andy Griffith was a rising star in 1953 when he recorded the hit, “What It Was, Was Football.”

The monologue featured the story of a naïve, young preacher who stumbles upon a game being held in “a pretty little green cow pasture” where “somebody had took and drawed white lines all over it and drove posts in it.” The musings of the actor, completely mystified by a game with a “funny lookin’ little pumpkin to play with,” became a national sensation.

About the same time, Lander had its own version of “what it was, was football.”

The 1952 Naiad featured a photo showing the “Lander Willies,” who appeared to play the first Lander football game that academic year. Charles Henderson was the coach.

In their book, “Lander University,” Dr. David Mash and Lisa Wiecki shared this information from a photo with the team’s early players: “With Ray Cronic and Hugh Pratt as stars, who could stop them? Anyway, this touch football team played several games with men’s clubs in the town. Keep working, boys! Some day.”

A November 1955 article in The Index-Journal featured a letter from Roy Wilson, of the Lander College Men’s Club: “Lander College now has a football team … it isn’t tackle, nor in such a large scale that we have a two-platoon system, but it is a start. For the past two or three years, ping pong has been about the only sport that a male student here could play. But this year, it’s different. Lander men are playing football, volleyball, and hope later to play basketball and softball.”

Lander’s “football team” may not have become a pig skin powerhouse, but the University today has numerous athletic teams that continually are ranked within the Top 25 in the nation, and are highly competitive in the Peach Belt Conference and NCAA Division II. The University also provides opportunities for all students to participate in various club sports and intramural events.

For those who love fishing, Lander also has a co-ed bass fishing team that competes in tournaments throughout the nation.

Lander’s student athletes score high in the classroom, too, and many are listed annually on the Peach Belt Conference Presidential Honor Roll.