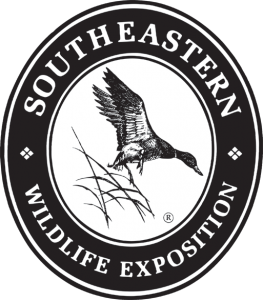 The Southeastern Wildlife Exposition (SEWE), a 501(c)(3) nonprofit organization that celebrates wildlife and the great outdoors through fine art, live entertainment and special events, has named Boone, North Carolina-based artist Ryan Kirby as the Featured Artist for next year’s event. Kirby’s original piece, The Departure, has been selected as the 2023 event’s Featured Painting and will be the subject of the official SEWE 2023 poster. The 41st annual Southeastern Wildlife Exposition will be held in downtown Charleston, February 17 – 19, 2023.

The Southeastern Wildlife Exposition curates a collection of fine art from the nation’s most talented wildlife painters and sculptors. Each year, the event selects one individual to recognize as the Featured Artist, to represent the annual show and create the focal point piece that embodies the spirit of SEWE. Kirby joins a long list of acclaimed international artists who have earned the esteemed Featured Artist title, including John Banovich, Julie Jeppsen, Greg Beecham and more.

“There is going to be a tremendous amount of excitement with the announcement of Ryan Kirby as the SEWE 2023 Featured Artist. Ryan is a passionate outdoorsman, avid conservationist and accomplished artist. His authenticity and approachability have made him a favorite at SEWE over the years,” said John Powell, President of SEWE. “Ryan is always willing to discuss his work and pursuits with attendees, which is surely why so many feel like they know him on a personal level. I have known Ryan as an artist and friend for more than a decade, and his dedication to SEWE and wildlife art is a gift we all look forward to celebrating now through the upcoming show in February.”

Kirby is well respected in the wildlife arts genre and known in the art community for his ability to recreate candid and captivating moments from the great outdoors. The creativity behind his art is inspired by his experiences with animals and nature, dating back to 1989 when he and his family lived on a farm in Hamilton, Illinois. From turkey hunting to fishing in the Mississippi, his early immersion with wildlife laid the foundation for his passion and inspiration for the natural world.

“It’s a huge honor and a great opportunity for me to be selected as the SEWE 2023 Featured Artist. I’ve been a part of the show for nine years now, and in that time I’ve seen some tremendously talented artists take the stage with this esteemed title,” said Ryan Kirby. “Now that it’s my turn, I intend to work very hard and bring my best work to the upcoming show.”

The Departure, was chosen as the 2023 Featured Painting and depicts a trio of pheasants soaring together through a field. In addition to studying, sketching and planning the composition of the piece, Kirby spent 11 days in the studio and nearly 100 hours bringing the painting to life on a 48” x 36” canvas. He will unveil this year’s Featured Painting on October 15 at Flyways, a new event hosted by SEWE and Ducks Unlimited in Charleston. The inaugural fall celebration will honor the great migration of waterfowl and will be the official start to SEWE ahead of the 41st annual show in February. Tickets are limited and available for purchase online.

Kirby attended SEWE for the first time in 2010, prior to launching his career as a full time artist. In 2013, he was accepted to showcase his paintings at the event and quickly became a popular SEWE artist with annual collectors. His work has been highlighted in Field & Stream, Outdoor Life, Game & Fish Magazine and Garden & Gun. In 2014, Outdoor Life featured Kirby’s work on the cover of their magazine, making it the first fine art cover the publication had run in more than 20 years. Since then, Kirby’s work has been featured in six additional issues of Outdoor Life.

SEWE is recognized as the nation’s premier wildlife art show and kickoff event for Charleston’s tourism season. The nonprofit organization’s mission is to showcase the finest in wildlife art, create awareness for the conservation of wildlife and the environment, positively influence wildlife and nature education and impact the local and statewide economies through increased tourism.

SEWE will host its 41st annual event at multiple venues across downtown Charleston, February 17-19, 2023. Tickets go on sale Friday, October 14 and will be available for purchase online at sewe.com/events-tickets/.

About the Southeastern Wildlife Exposition

For more than 40 years, the Southeastern Wildlife Exposition, a 501(c)(3) non-profit organization, has proudly presented the finest in wildlife art, conservation and the outdoor lifestyle at its annual event in Charleston, South Carolina. SEWE will host its 41st event in 2023 at multiple venues throughout downtown Charleston from February 17 – 19, with VIP events beginning on Thursday, February 16.