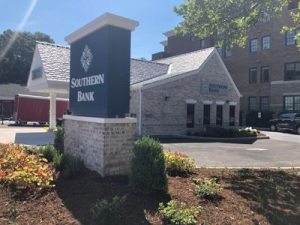 “The Southern Bank board of directors are strong leaders in business and financial services,” said Hujik, Vice Chairman and CEO of The Southern Bank. “Their backgrounds are assets to the bank as we expand our digital services and into new communities.”

Hujik is CEO of The Southern Bank. He has over 20 years of community banking experience, including leadership roles in non-publicly traded and publicly traded companies. Much of his career was spent at CresCom Bank, where he led departments throughout the bank which had grown to 73 branches and $5.5 billion in assets. Hujik is a member of the American Institute of Certified Public Accountants, the South Carolina Association of Certified Public Accountants, the Rotary Club of Spartanburg, and a prior member of the Payment Advisory Council of the Federal Reserve Bank of Richmond.

Frierson is president of The Southern Bank. He is an experienced community banker with more than 35 years of experience leading and building organizations and teams. Frierson most recently was Upstate S.C. Market President for United Bank which acquired CresCom Bank in May 2020. Frierson has served as chairman of the South Carolina Bankers School Board and as a director of the South Carolina Bankers Association Board. He has been on various charitable and community boards, including Greenville Forward, Artisphere, YMCA of Greenville, Urban League of the Upstate, Center Stage Theatre, Greenville County Youth Orchestra, and the Clemson University PACE Board.

Brandon is the owner and CEO of The Brandon Agency, South Carolina’s largest privately-owned advertising agency, with offices in Charleston, Charlotte, Orlando, and Myrtle Beach. Brandon has 20 years of experience serving as a director for banks and bank holding companies. He has served on the board of directors for Carolina Financial Corporation and its subsidiary, CresCom Bank, a Charleston, S.C.-headquartered, publicly traded bank holding company with $4.7 million in assets. During his service on the board, he served as the president of the bank board, vice chairman of the holding company board, chairman of the Asset-Liability Committee, and a member of the Audit and Governance Committee.

Cole has more than 30 years of banking experience and has demonstrated success at building and leading high-performance community banks with a focus on team building and shareholder value. He has operated public and privately-held banking companies. with extensive experience in capital management and capital raising. Cole was formerly the CEO and director of First Capital Bancshares, Inc. and First Capital Bank.

Conner is the former CEO of The Southern Bank. He has served on the board of directors since 1985 and was a former chairman. Conner is a past president of the Community Bankers Association of Georgia and a past president of the Chamber of Commerce of Burke County. Conner serves as chairman of the Development Authority of Burke County. He is also active in the Sardis, Ga., community, having served as mayor for 14 years and a city councilperson for two years.

Garritson has more than 35 years of experience in marketing, sales, manufacturing, and entrepreneurial success. He co-founded The Facilities Solution, which was recognized as one of Inc.’s 500 Fastest-Growing Companies. The company is a rapidly growing commercial property management firm with a Fortune 500 customer list. He has served on the board of directors for several organizations, including the South Carolina Manufacturers Extension Partnership, the National Institute of Standards and Technology, and the Institute of Organization Management for the U.S. Chamber of Commerce.

Owings, a co-founder, chairman, and CEO of ScanSource, Inc., led the company through its initial public offering in 1994 and a secondary offering in 1998. He became executive chairman and grew the company to a Fortune 1000 company with $1.5 billion in revenues, mostly from organic growth. He has served on the board of directors of multiple private and public companies including ScanSource, Inc., FalconStor Software, and Globelle Corporation. Owings has also served on various charitable foundations and community boards, including Clemson University Research Foundation, Medical University of South Carolina Foundation, Peace Center for the Performing Arts, Artisphere, St. Francis Hospital Foundation, and Bon Secours St. Francis Hospital Board of Directors.

Smith has 16 years of experience in the financial services industry. As a Commercial Relationship Manager with First Citizens Bank, Smith’s primary responsibilities include expanding relationships with current commercial clients and providing solutions that help them meet financial goals. Most recently, clients engaged him to help seek growth and exit capital strategies, neither of which banks provide traditionally. He is currently a partner at Styx Companies, located in Columbia, S.C., and is active in numerous civic and volunteer organizations, including S.C. Young Bankers Association, Wofford College Alumni Board, and The Palmetto Club Board. He serves as Treasurer of the South Carolina Junior Golf Foundation, and Treasurer of Still Hopes Episcopal Retirement Homes.

DeLoach has been a board member for The Southern Bank since 1995. He is a former mayor of Waynesboro, Ga., and most notably, a former Georgia House of Representative. Before his career in public service, DeLoach was president and funeral director of DeLoach Funeral Home. He continues to serve his community by serving as a member of the Georgia Department of Community Affairs, the South Richmond County Pride and Progress Committee, South Augusta Exchange Club, and South Augusta Civic Club.

To learn more about The Southern Bank, its leadership, and its services, please visit www.thesouthern.bank.