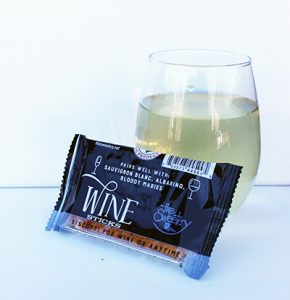 The family-owned bakery, The Sweetery, will be introducing a single portion size of its popular Wine Sticks line this weekend at the National Association of Specialty Foods trade show in San Francisco.

The new portion size is the latest development in the Anderson-based company’s Wine Sticks and Beer Buddies lines that are delectable treats crafted to pair perfectly with an assortment of wines, beer and other beverages, said Ryan Jarahian, co-owner of the Sweetery. Wine Sticks and Beer Buddies, which are preservative-free, are designed to flavor and blend with their drink while not easily crumbling when dipped.

“What biscotti is to coffee, Wine Sticks are to wine,” he said. “Each flavor is designed to combine with specific wine selections to enhance flavor notes, but are also great with artisan cheese, spreads, coffee, tea, or as stand-alone treats.”

Normally served in packs of fourteen, the new Snack Pack portion will offer two of the biscotti-like bars that are designed to appeal to airline users as well as bar and restaurant goers, Jarahian said.

The Snack Pack will debut at the Winter Fancy Food Show, which starts on January 19th in San Francisco.
The event is one of the largest culinary showcases in the world with more than 80,000 specialty foods and beverages in display; 1,400 plus exhibitors and thousands of new products being shown.

“The Snack Pack is the natural evolution for the line,” he said. “We have focused on the home market with an emphasis on people hosting parties and events. This allows us to get more into the service industry side.”

For more than 37 years, The Sweetery has adhered to its recipe for success: using fresh, natural ingredients, cherished family recipes and a passion for baking to create delicious gourmet desserts. Based in Anderson, South Carolina, this dessert retailer has become known for creating innovative and exciting treats by blending new flavors with traditional favorites. Jane Jaharian began her homemade baked goods business in 1982 and later was joined by her son Ryan, who expanded the bakery’s product line and grew the company’s local restaurant offerings to a nationwide shipping business. Today, The Sweetery operates as a restaurant and ships desserts all over the country, including their proprietary Wine Sticks and Beer Buddies. Learn more at www.thesweetery.net, or follow them on Facebook at www.facebook.com/thesweeteryinanderson.