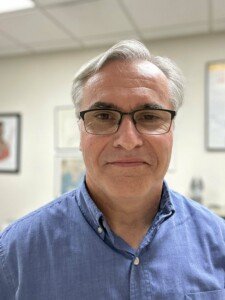 Just about everyone can get behind the themes of Thanksgiving – gratitude and sharing. But those weren’t the reasons that brought the Puritans and Native Americans together in 1621 for the first feast.

Christophe Boucher, an associate professor of Native American history at the College of Charleston, recently give us some perspective on the real history behind Thanksgiving and the geopolitics that shaped relations between European settlers and Native Americans.

Can you give us an accurate history of Thanksgiving?

Based on the scarce documentary evidence we have (very succinct statements in two primary sources written by Edward Winslow and William Bradford, who lived in the Plymouth colony at the time), we can conclude that it took place in the fall of 1621 (it shows how scant the sources are and it points to the fact that even the Puritans did not consider the event so important as to provide a long description of it).

While Bradford’s description is too cryptic to get a clear understanding of the events (and he wrote it 20 years after the facts), Winslow’s observations are more useful. According to the latter, at some unspecified date in the fall of 1621, Governor Bradford asked the colonists to come together so that they could, he wrote, in “a special manner rejoice together.” It does not seem that the Wampanoags, who lived close by, had been invited to the event. However, Winslow’s statement suggests that 90 indigenous men and their leader Massassoit were drawn towards the settlement when, during the event, the colonists used firearms. Winslow then adds that colonists “entertained and feasted” the visitors for three days.

Wow, so there really wasn’t this kumbaya moment with the Wampanoags that most people assume, but the tribe was instrumental in helping the first Pilgrims survive. What do you know about them?

The Wampanoags spoke an Algonquian language and their name means “People of the First Light” after the geographic location of their homeland on the eastern seaboard. Their territory stretched from Cape Cod to the eastern edge of Narragansett Bay and from Nantucket Island to Norfolk County (Massachusetts). The term refers to an alliance of some 30 Algonquian polities located in the region. Among these were the Patuxets, the Mashpees and the Nausets.

At the time of contact with the Puritans, Ousamequin, a Pokanoket, had risen to political prominence among the Wampanoags. “Massassoit” was actually his title. It is likely that the Wampanoag confederacy was founded as a result of tensions with neighboring indigenous polities at an undetermined date. It is difficult to estimate the size of the population at the time. Up to 40,000 individuals may have belonged to the Wampanoag confederacy.

At the time of contact, they had a mixed economy based on agriculture, fishing, hunting and gathering. Each community was led by a leader (Sachem) who received this title from his mother’s clan since the Wampanoags were matrilineal. Based on primary sources of English provenance, a Sachem held a number of prerogatives. Among other things, Sachems could allocate land to fellow community members who had to give them tribute in return. The items thus acquired were redistributed strategically to strengthen their authority. Sachems conducted diplomacy with neighboring polities, and they seem to have been responsible for enforcing the law (even though English observers tended to assume that indigenous leaders had much more power than they did in actuality). They might have also played a critical role in long-distance trade as well since prized and exotic goods were exchanged between community leaders during diplomatic events.

Why did the Wampanoags allow the English to settle on their land when they could have just as easily pushed them back in the sea when they were at their weakest?

Clearly, Plymouth survived in great part because the Wampanoags helped them. This decision has to do with indigenous geopolitics. From 1616 to 1618, some epidemic(s) of European origin wreaked havoc among the Wampanoags with dreadful demographic consequences. The indigenous communities had lost as many as 90% of their residents. Interestingly, the Narragansetts, who were the traditional rivals of the Wampanoags, had remained unscathed by the deadly pathogens which reshaped the regional balance of power. Now the Narragansetts were in a better position to promote their political agenda at the expense of the Wampanoags (the latter, for instance, had to cede some land to the former and pay tributes). At the same time, the Mi’kmaqs, who lived in what is today Quebec, New Brunswick, and Nova Scotia, intensified their raids on the weakened Wampanoags. The materialization of a European colony suddenly gave the Wampanoags an opportunity to counterbalance the power of the Narragansetts and other enemies.

How long did they get along before things turned bad for Native Americans?

When it comes to the souring of relations and signs of things to come, I would point to the treaty that the Wampanoags and the colonists agreed to in March 1621. The document confirmed the alliance between the parties involved against an unspecified third party but, among other things, it also stipulated that any indigenous person guilty of assaulting a colonist would be tried according to English law. Even though an alliance with the English had clear benefits for Massassoit and the Wampanoags, it was also a reminder that the English did not see their indigenous neighbors as equals. In fact, they expected that indigenous peoples would submit to their authority. Furthermore, the colonists had little patience with cultural diversity. They also saw the demographic collapse of the indigenous population as evidence that God favored the colonists and condoned the destruction of those who lived there before.

What ultimately hastened the collapse of diplomatic relations between the English and the Wampanoags was the arrival of thousands of colonists after 1630 which ended up tipping the balance of power in favor of the newcomers. Colonial expansion exacerbated tensions over land use and ownership and a host of other issues (the tendency of colonists to raise semi-feral pigs even contributed to tensions since these voracious animals ruined Native American fields that were not fenced).

Often the grievances remained unaddressed. By the mid-1630s, the Puritans saw themselves increasingly as the dominant power in southern New England and did not hesitate to resort to violence to impose their will on the local population. In 1637, for instance, they waged war against the Pequots with such violence that even the indigenous enemies of the Pequots were stunned.

Despite the growing grievances, Ousamequin managed to avert war between the Wampanoags and the English colonists. After his death, his son Metacom (also known to the English as King Philip), threatened by the growing intransigeance of the English and an erosion of his power, led an attack on the colonists that became known as King Philip’s War. Once the dust settled in 1677, the defeated Wampanoags were no longer in a position to challenge their white neighbors and they quickly became strangers in their own land.

Given the slaughter and displacement of Native Americans that has taken place in this country, how do they feel about Thanksgiving? Do they even celebrate it?

For the reasons you mention, Native Americans do not see Thanksgiving as a cause for celebration. For them, it is a reminder that contact with Europeans has had cataclysmic effects that left them with little political power and hastened their disenfranchisement.

These days, history has become so politicized that trying to set the record straight can trigger disturbing responses. Sadly, some go as far as seeing this endeavor as a treasonous act. As a scholar, I think it is necessary to teach folks in the country why Native Americans do not see Thanksgiving as a reason for celebration and why it is instead for them a reason for mourning. That is predicated on the willingness of Americans to study history instead of accepting as history a bunch of sanitized founding-myths that are designed to confirm nationalist and racist attitudes.

Contrary to the appearances and the slogans, The General Allotment Act of 1887, for instance, was not designed to improve the lives of Native Americans by doing away with the reservation system. It was in part designed to seize control of more indigenous land in the U.S. under the guise of humanitarian reforms. The tendency to appoint Native Americans like Deb Haaland in the highest echelons of the government is a move in the right direction. The high-handed and paternalistic behavior of the U.S. government has made Native Americans wary of the federal bureaucracy and placing Native Americans in positions of power could help change this perception.