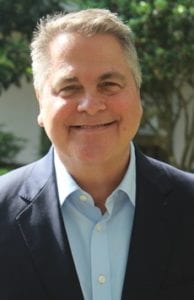 The Healthy Learners Champion for Children Award recognizes and honors an individual who has served as an advocate for children and brought attention to the needs of underserved children in the community through volunteer time, financial support and commitment to Healthy Learners.

Awarded by Healthy Learners and the Healthy Learners Board of Trustees, the award will be presented to Keith during the 20th Annual Healthy Learners Champions for Children Golf Tournament in Memory of George Younginer on Wednesday, October 23, 2019, at the Fort Jackson Golf Club in Columbia, SC.

Keith has served as president of the Sisters of Charity Foundation of South Carolina since 1996. His leadership has grown the foundation into a major philanthropic force in South Carolina. He has more than 40 years of experience in nonprofit management in five states. Keith serves on the Columbia College Board of Trustees and the Columbia Free Medical Clinic Board of Trustees. He also serves on the SC Center for Fathers and Families Board.

Keith has been an active member of the Southeastern Council of Foundations since 2000, and he served on its board from 2004-2010. He is a founding member and former chairman of the South Carolina Grantmakers Network, a group of 40 grant-making foundations from across the state. He has a bachelor’s degree in communications from Marshall University and a Master of Business Administration from Winthrop University. He and his family live in Irmo, South Carolina.

“Tom has consistently demonstrated his long-term commitment to increasing access to health care for children and to advancing the mission of Healthy Learners,” said Matthew Roberts, chair of the Healthy Learners Board of Trustees and chair of Nexsen Pruet’s Health Care Practice Group. “He is truly deserving of the Champion for Children award this year. For almost three decades, Tom has been a leader in South Carolina on issues related to helping children in need. His work has impacted thousands of children’s lives over the years and we are honored to be able to recognize him.”

“Healthy Learners has been an important part of my life for the last 26 years. I am honored to be part of such a wonderful organization. Children’s health is something we must not ignore, and Healthy Learners does a great job of helping children become healthier every day,” said Keith.

Registration for the Healthy Learners Champion for Children Golf Tournament in Memory of George Younginer begins at 10 a.m. followed by a noon shotgun start. The day will conclude with dinner and entertainment, announcement of winners and the awarding of prizes. Please join us for an exciting day of golf and fun benefitting the children served by Healthy Learners.

For registration and general tournament information, please contact Marge Rath, Director of Development by telephone at 803.454.0350, via email at [email protected], or visit the Healthy Learners website at healthylearners.com.

Healthy Learners was founded in 1992 based on the belief that children learn better when they are healthy.  A ministry of the Sisters of Charity Health System, Healthy Learners has five programs that serve 150 schools across twelve (12) South Carolina school districts. The counties served are Allendale, Dillon, Fairfield, Georgetown, Greenwood, Lexington and Richland. Since its start, Healthy Learners has provided over 70,000 vision, dental, medication and other health-related services to 14,131 students over the last 27 years. For more information, see healthylearners.com.