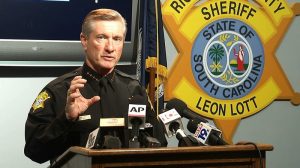 Several new high-level promotions and leadership reorganizations were announced at the Richland County Sheriff’s Dept. (RCSD) earlier this month. One new chief, two majors, five captains, five lieutenants, and numerous sergeants and other deputies moved up the ranks according to a memo released by Sheriff Leon Lott on Dec. 2. Additionally, several RCSD leaders – both newly promoted and those retaining present rank – were shifted to other units or had additional responsibilities placed under their given commands.

“We are constantly changing and readapting to meet the needs of the communities we serve and the ever-changing dynamics of the broader threat matrix,” said Sheriff Lott. “We need experienced law enforcement officers commanding our regions and all of the other interconnected units and teams within this department, and at the same time we need new ideas from up-and-coming RCSD leaders.”

Lott added, “Upward mobility for new deputies while retaining experience in key positions is absolutely essential in an organization like this.”

Among the new promotions were Chief Jim Stewart, a 40-year veteran of RCSD, and Major Maria Yturria, a former U.S. Army military police officer, who today directs RCSD’s public information office and will add Stewart’s previous responsibilities within the office of professional standards to her mix.

“Added responsibilities are easily embraced in a culture like this at RCSD where you know every subordinate officer is as competent, committed, and able as you trust yourself to be,” said Yturria. “So, yes, there’s more work, but there’s also an infusion of new energy and great new ideas from everyone all around you. We’re literally all taking care of one another.”

Lateral leadership moves and moves up the chain took place among the ranks of patrol deputies and their supervisors within each of RCSD’s eight jurisdictional regions, as well as the Community Action Team where Danny Brown of LIVE PD fame was promoted from lieutenant to captain, and recently promoted Sgt. Marcus Kim moved up to lieutenant: Also Youth Services, School Resource Officers, 911 Communications, Internal Affairs, the Criminal Investigations Division, even the Special Response Team (SWAT team).

“We are not a static organization,” said Lott. “We cannot afford to be.”