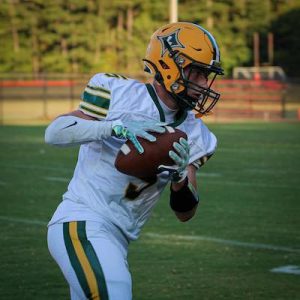 The Laurens County Touchdown Club is proud to announce that for games played on October 14th, the Player of the week is senior wide receiver and special teams player Cayson Elledge of Laurens District High School.

Elledge is wide receiver and special teams player for the Laurens District School Raiders as they defeated Wade Hampton Friday night by a score of 45 – 35 to go to 2 – 1 in region play and remain alive in the region title race.  LDHS will host Eastside High School this Friday night for Senior Night.

Elledge, a Laurens District High senior, had 3 catches for 89 yards and 2 touchdowns.  The touchdown receptions were from 18 yards and 60 yards, respectively.   With those 89 yards, Elledge surpassed the 1,000-yard mark for receiving yards during his career at LDHS.

Laurens District High School Head Coach Daryl Smith stated, “Cayson Elledge has been a steady player for us and has played at a high level for 3 years.  He went over 1,000 yards receiving last Friday for his career along with being a kickoff and punt returner for us.  Cayson not only excels on the field but he is an excellent student and teammate.”