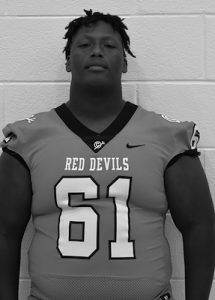 The Laurens County Touchdown Club is proud to announce that for games played on October 28th, the Player of the week is senior offensive lineman and captain Jay Martin of Clinton High School.

Martin is offensive lineman for Clinton High School as the Red Devils defeated the Emerald Vikings by a score of 37 – 6 last Friday night on Senior Night at CHS.  Clinton High will host Travelers Rest this Friday night at Wilder Stadium to begin the first round of the SCHSL AAA Playoffs.

Martin, a Clinton High School senior captain, has 53 knockdown blocks on the year and has graded out at nearly 90% and he did this past Friday Night.  He dominates the offensive line of scrimmage for the Red Devils each and every week leading a host of running backs to rush for over 3,000 yards for the Devils thus far.

Clinton High School Head Coach Corey Fountain stated, “Jay has been a staple on the varsity since his Freshman year.  He is a hard nosed kid that plays the kind of physical ball Clinton High is known for.  He also gives us quality reps on the defensive line.”