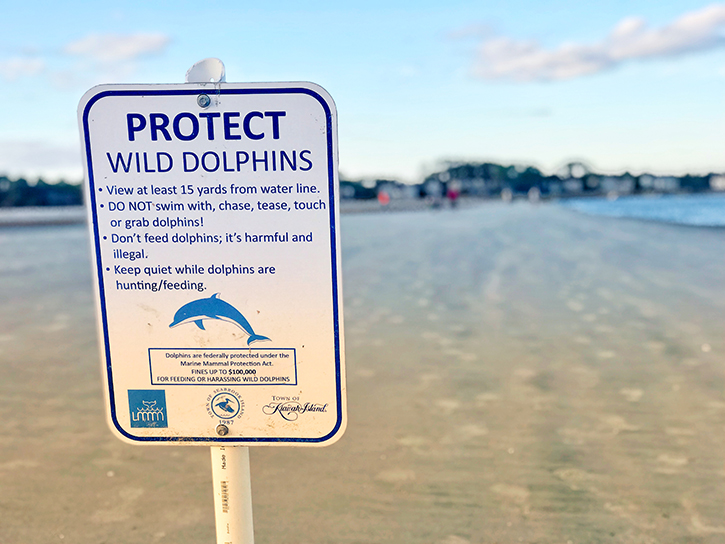 Courtesy of the Municipal Association of SC

The Town of Seabrook Island received a Municipal Achievement Award for its dolphin education program. The town won in the 1,001 – 5,000 population category. Twenty-nine cities and towns submitted their projects and initiatives.

Seabrook Island has the distinction of being one of the few places where visitors can observe Atlantic bottlenose dolphins in the process of strand feeding, a behavior in which they launch themselves up onto a beach to eat the fish they have driven out of the water before them.

The spectacular hunting strategy is a tourist draw, but it’s also vulnerable to human interference. To protect it, the Town of Seabrook Island focused on education for beachgoers by building partnerships with a local nonprofit group, volunteers and the National Oceanic and Atmospheric Administration Fisheries.

The Seabrook Island Dolphin Education Program, designed by NOAA Fisheries and managed by the Lowcountry Marine Mammal Network, relies on volunteers working during peak tourist season to engage with and educate beachgoers about the process while also collecting data on strand feeding and the impact humans have on it. As a tourism project, the town supported it with state accommodations tax funding, and the program was coordinated with the neighboring Town of Kiawah Island.

In its initial 2018 season, program volunteers worked more than 600 hours on the beach, interacting with more than 1,400 beachgoers. The season ended with no significant dolphin disturbances, and the educators were able to track the behavior of 11 dolphins, including one new calf.

For 2019, the town aims to increase volunteer participation and coverage hours. It hopes to eventually build enough volunteer expertise to transition program management to a volunteer-run organization, similar to the Seabrook Island Turtle Patrol, Birders Group and National History Group.

These winning entries represent innovative projects undertaken by Municipal Association member cities and towns. Information and a video about the project are available on the Association’s website www.masc.sc (keyword: Achievement Awards).

The Municipal Association of South Carolina initiated the Achievement Awards in 1987 to recognize and encourage innovations and excellence in local government.