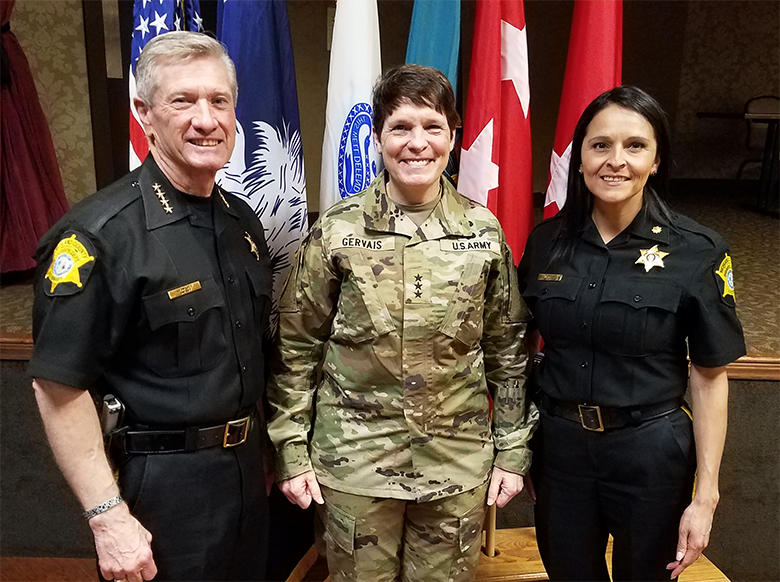 Lt. Gen. Maria Gervais speaks to the criticality of community

Lieutenant General Maria Gervais, deputy commanding general and chief of staff of the U.S. Army’s Training and Doctrine Command (TRADOC), was the keynote speaker at the Association of the United States Army (AUSA) Fort Jackson-Palmetto State chapter’s monthly luncheon at the Fort Jackson NCO Club, Tues. March 8. Gervais addressed the all-volunteer force. She touched on the war in Europe. And she discussed the importance of relationships between the Army and the communities surrounding its posts.

“South Carolina is one of the most military friendly states supporting those who serve and our veterans,” said Gervais, who pointed to the tangible necessity of maintaining those relationships which engender that support.

“One of our national security imperatives is how do we maintain the all-volunteer force,” Gervais said, speaking to an audience of largely AUSA members, other veterans, currently serving Army officers and senior staff NCOs. “We have to always be out in the various communities reinforcing, rebuilding, and reconnecting with all of our partners and veterans to help us develop and sustain the all-volunteer force.”

“AUSA is in fact making the important connections between the Army, the Fort Jackson community, and the greater Columbia and Richland County communities,” Lott said. “It’s what we do. It works, and it’s one of the many reasons why the relationship between Columbia, Fort Jackson and our veterans, which is second to none, continues to flourish.”

The Columbia business community and TRADOC’s goals are near indistinguishable when it comes to the military in central South Carolina.

“Both the Columbia Chamber and TRADOC’s goals are to promote, protect, and grow the Army mission,” said Susan McPherson, vice president, military affairs and public policy at the Columbia Chamber. “Part of this multi-faceted goal is to educate bright young people about what, in terms of opportunity, the military has to offer them and to recruit them for careers in the military.”

McPherson adds, “It was great have Lt. Gen. Gervais – one of the Army’s highest-ranking females and a South Carolina hometown hero – here championing the great work being done by support organizations like AUSA, the USO, the S.C. Department of Veterans Affairs, Friends of Fisher House, and so many others which contribute to the success of our military families and veterans, local ROTC programs, and the Columbia Recruiting Battalion. These partnerships are what make us a great American defense community.”

The 2,267-member Fort Jackson-Palmetto State Chapter is one of two AUSA chapters in South Carolina.