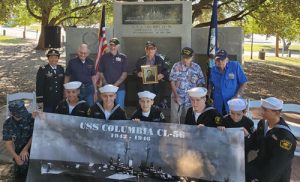 Educational activities continue at the South Carolina Confederate Relic Room and Military Museum, but a little differently from what we’re used to. For instance, on Saturday, July 18, we’ll have a training exercise for the local unit of the U.S. Naval Sea Cadet Corps.

We’ve had plenty such sessions before, but this will be the first one in which none of the cadets is physically present!

The Sea Cadet Corps is a youth organization promoting patriotism and the Sea Services (the U.S. Navy, Marines, Coast Guard and Merchant Marine) to young people. Cadets train for one weekend each month, and attend a Boot Camp and a variety of summer trainings in areas of special interest.

In past years the Relic Room has occasionally hosted Columbia (CL-56) Palmetto Division of the Sea Cadets on weekend “drill” days, as well as holding a week-long training focused on naval history and public speaking. They’ve spent time with the artifacts and history of the USS Columbia (CL-56), the unit’s namesake, and even engaged in 1860s-style cutlass drill. In past years they’ve also provided the color guard to open the annual Southeastern Toy Soldier Show in the museum atrium.

Last year, they got to meet actual Navy veterans who served on the Columbia during the Second World War.

But this summer, the national headquarters of NSCC has cancelled all “in-person” trainings because of the COVID emergency. So this time, cadets will receive a museum-based military history lesson as well as virtual instruction in the Sea Cadet curriculum – all through the museum’s Zoom capabilities.

How does that work? For a previous naval leadership lesson created for cadets by Education Curator Joe Long, see this recorded Zoom talk on the exploits of Captain Georg Von Trapp in the First World War: https://www.youtube.com/watch?v=pTpmEHT-3QU&feature=youtu.be

That’s just the beginning, though. Here are some of the other virtual learning opportunities provided by the museum during the COVID crisis: relicroomsc.com.

The Relic Room would like to use virtual learning to connect more youth organizations with our military history resources. Contact Joe Long, Education Curator, for more details! He can be reached at [email protected].