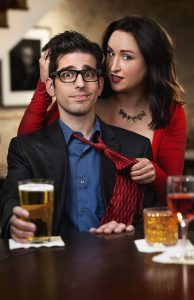 The perfect date night show comes to Trustus Theatre this summer. First Date, Broadway’s musical comedy, opens on the Thigpen Main Stage on Friday, June 17th and runs through July 16th. The show features an ensemble cast led by Trustus Company members Michael Hazin and Brittany Hammock, and includes Company members Kevin Bush, Robin Gottlieb, and Jonathan Monk, as well as Rachael Mitchum and Jacob Wilson. The cast is directed by interim Artistic Director Dewey Scott-Wiley with musical direction by Randy Moore and choreography by Brailey Johnson and Shaun Moreland. Trustus is partnering with local restaurant Gervais and Vine to offer a Date Night package on select nights, including dinner and drinks and tickets to the show. Reserve tickets online at trustus.org/event/first-date or by calling the Box Office at (803) 254-9732.

When blind date newbie Aaron (Hazin) is set up with serial-dater Casey (Hammock), a casual drink at a busy New York restaurant turns into a hilarious high-stakes dinner. As the date unfolds in real time, the couple quickly finds that they are not alone on this unpredictable evening. In a delightful and unexpected twist, Casey and Aaron’s inner critics take on a life of their own when other restaurant patrons transform into supportive best friends, manipulative exes and protective parents, who sing and dance with them through ice-breakers, appetizers and potential conversational land mines. Can this couple turn what could be a dating disaster into something special before the check arrives?

Interim Artistic Director and longtime Company member Dewey Scott-Wiley directs this New York-paced comedy. “First Date is a relatable and hilarious look at our need to connect with each other,” she says. “The joy of the show is that we get a glimpse of the ridiculous voices in the heads of the two main characters.  It really invites the laughter of recognition as we laugh at the insane things we tell ourselves.” Company member Brittany Hammock hopes the show reminds us what is so important about face-to-face connection. “I hope this show reminds people that in order to build meaningful relationships we have to cross the threshold; literally get out of our houses, get off of our phones, and just BE together.  Maybe that feels a little risky after hermitting ourselves away for so long, but the pursuit of love isn’t for the faint of heart.”

Michael Hazin, last seen onstage as Jon in Trustus’ February production of tick, tick… BOOM!, believes everyone will walk away from the show having seen some facet of themselves onstage. “It certainly speaks to me because I have absolutely been in Aaron’s position. I think it probably speaks to most people,” he says. “The show comments on so many facets of the dating world that I think there’s something that will speak to anyone who comes to see the show.” Brittany Hammock, who played multiple roles in the aforementioned production of I Love You, agrees that this show is all-around relatable, especially when it comes to her character, Casey’s ballad, Safer. “It’s an incredibly powerful and moving solo about the fear of putting yourself out there for love. The first few times I heard the song, I couldn’t hold back my tears.  It speaks so precisely to my own issues and experiences with family, relationships, and dating, it’s as if I’m recounting an entry from my private diary.”

Robin Gottlieb, another long-tenured member of the Trustus company, steps onstage after directing the theatre’s season opener, I Love You, You’re Perfect, Now Change. After swapping her director’s hat for an actor’s hat, she finds that directing a small cast who plays multiple parts is much easier than playing multiple parts herself. “ I asked my cast to do things – bold things outside of their comfort zone. Now, I am having to practice what I preach. The energy it takes to be on stage, trying new things, exploring different voices, and physicalities, is a lot more physically challenging than directing people to do so, from the comforts of a chair.” She finds that being on this side of the table also enables her to be a better director. “It’s all about putting yourself out there, and doing something new, growing and expanding as an artist, and in turn, as a human.”

Trustus Theatre is excited to partner with local restaurant Gervais and Vine for a fabulous Date Night package! On select nights, enjoy a dinner at Gervais and Vine before your performance. Your dinner includes access to the entire menu of Mediterranean-inspired small plates and tapas and a glass of wine per ticket. Simply book your tickets and dinner package online at trustus.org and arrive at the restaurant by 6:30pm for ample time to enjoy your meal ahead of your 8:00pm performance. Gervais and Vine is located at 620 Gervais Street, perfect for a short walk to Lady Street for the show. Limited spots are available, and advance reservation is required. For more information, contact the restaurant at (803) 799-8463.

First Date opens Friday, June 17th at 8:00pm and runs through Saturday, July 16th. Please note: matinees on June 26th and July 10th will be at 2:00pm with doors opening at 1:00pm. In observance of the holiday, there will be no matinee on Sunday, July 3rd. The box office and bar open one hour prior to show time.  For more info on Trustus’ Safety Guidelines, please visit trustus.org/safety-guidelines. Reservations can be made online at trustus.org or by calling the Box Office at (803) 254-9732.