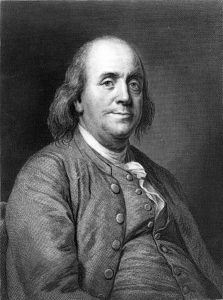 A business friend occasionally calls to invites me to lunch – and I know why.

Across the table he says, “You know I never call you unless I want something.”

He tells me what it is he needs and, since he knows I can do it, I oblige him. It makes me feel good that he turned to me and that I could do a favor for someone I like.

Most of us believe that the way to win friends is to do them a favor. Ben Franklin found the opposite works even better.

If you are a Ben Franklin fan, you undoubtedly know this story. It is a good reminder of a strategy he discovered and you can use on those who may demean you.

Franklin had incurred the ill will of a wealthy man. The man berated Franklin to others and questioned his competence.

Franklin knew the man had a prized collection of books and wrote him asking to borrow a book he knew the man owned.

This gained the man’s attention. If Ben knew about this book, he must be smarter than he had thought. He loaned Franklin his book, Franklin read it and returned it with a thank you note a few days later.

Surprisingly, the man became one of his champions and extolled his virtues.

Do you have a detractor or seek a relationship with someone? Ask for a favor.