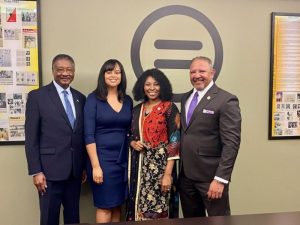 In honor of Martin Luther King, Jr.’s legacy, the United Community Bank Foundation donated $25,000 to Urban League affiliates across its footprint. The Urban League’s dedication to economic empowerment aligns with the bank’s commitment to improving the financial health of the communities we serve and Dr. King’s dream of economic justice.

“At United Community Bank, we believe that economic empowerment is an essential part of building strong communities,” said Moryah Jackson, VP of Community Development and Engagement at United Community Bank. “That’s why we’re proud to contribute to Urban League affiliates in celebration of Martin Luther King Day and supporting the mission to invest in the economic success of African American and other historically underserved communities.”

“Dr. King once said, ‘There is nothing new about poverty. What is new, however, is that we have the resources to get rid of it.’ Our commitment to using our resources to build stronger communities by supporting the work of Urban League is one way we can help make Dr. King’s vision a reality,” added Jackson.

Donations to Urban Leagues across the Southeast include:

The National Urban League and its affiliates promote economic empowerment through education and job training, housing and community development, workforce development and entrepreneurship.

United Community Banks, Inc. (NASDAQGS: UCBI) provides a full range of banking, wealth management and mortgage services for relationship-oriented consumers and business owners. As of September 30, 2022, United had $23.7 billion in assets and 193 offices in Florida, Georgia, North Carolina, South Carolina, and Tennessee, along with a national SBA lending franchise and a national equipment lending subsidiary. The company, known as “The Bank That SERVICE Built,” has been recognized nationally for delivering award-winning service. In 2022, J.D. Power ranked United highest in customer satisfaction with consumer banking in the Southeast, marking eight out of the last nine years United earned the coveted award. Forbes recognized United as one of the top ten World’s Best Banks in 2022. Forbes also included United on its 2022 list of the 100 Best Banks in America for the ninth consecutive year. United also received ten Greenwich Excellence Awards in 2021 for excellence in Small Business Banking and Middle Market Banking, including national awards for Overall Satisfaction and Likelihood to Recommend. United was also named one of the “Best Banks to Work For” by American Banker in 2022 for the sixth consecutive year based on employee satisfaction. Additional information about United can be found at www.ucbi.com