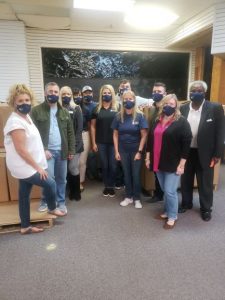 The United Community Bank team in Myrtle Beach recently participated in the bi-annual Supporting Military Families initiative for the benefit of local military spouses and their children.

“Many of us have family members who are in the military and know what it feels like when they aren’t able to come home for the holidays,” said Christie Manning, President of Coastal South Carolina for United Community Bank. “Military families face some of the toughest hardships, and this small token of appreciation is the least we can do for them as they support the brave men and women protecting our country.”

Supporting Military Families was founded in 2009, and United Community Bank has partnered with the organization for the past five years. Nearly two dozen of the bank’s team members joined together to organize and assemble the care packages. Each package included items such as notepads, stationary materials, shower gel, coffee, crayons, coloring books and jewelry. A handwritten thank you note and copy of The New Testament are also included in every package. Approximately 2,000 care packages were assembled for distribution this holiday season.