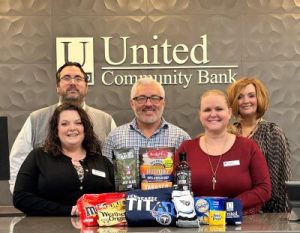 In observance of Veterans Day, employees of United Community Bank (United) are celebrating America’s veterans through acts of kindness and service across their five-state footprint. Teams across the Southeast are finding unique ways to thank and support veterans in their communities including organizing collection drives for care packages to send to military personnel, assembling and distributing care boxes to military families, raising funds to supply a veteran with training to train their own service dog and writing thank you cards.

“As a veteran of the U.S. Air Force and Naval Reserve it is incredibly important to me that we all take the time to appreciate those who have served our country whether in active duty or as reservists,” said Rich Bradshaw, president and, chief banking officer for United Community Bank. “I am extremely proud of our team for organizing efforts across our footprint that will positively impact those who have sacrificed so much for our country.”

Local activities and donations are driven by team members across the bank’s service area and include:

South Carolina
• Donating to Operation Rehabilitation, One80 Place, Service Dogs for Veterans and Upstate Warrior Solution.
• Employees from Charleston and Mount Pleasant will team up with the Myrtle Beach team to pack and distribute care boxes to military boxes.
• United branches in Laurens and Greenwood are raising funds to pay for a veteran to go through a training program to train their own service dog.

North Carolina
• Donating to Veterans Healing Farm.
• United branches in Cherokee will be handing out small gifts and personal thank you notes for Veterans.

Florida
• Donating to Wounded Warrior Project and Folds of Honor.

United Community Banks, Inc. (NASDAQGS: UCBI) provides a full range of banking, wealth management and mortgage services for relationship-oriented consumers and business owners. As of September 30, 2022, United had $23.7 billion in assets and 193 offices in Florida, Georgia, North Carolina, South Carolina, and Tennessee, along with a national SBA lending franchise and a national equipment lending subsidiary. The company, known as “The Bank That SERVICE Built,” has been recognized nationally for delivering award-winning service. In 2022, J.D. Power ranked United highest in customer satisfaction with consumer banking in the Southeast, marking eight out of the last nine years United earned the coveted award. Forbes recognized United as one of the top ten World’s Best Banks in 2022. Forbes also included United on its 2022 list of the 100 Best Banks in America for the ninth consecutive year. United also received ten Greenwich Excellence Awards in 2021 for excellence in Small Business Banking and Middle Market Banking, including national awards for Overall Satisfaction and Likelihood to Recommend. United was also named one of the “Best Banks to Work For” by American Banker in 2021 for the fifth consecutive year based on employee satisfaction. Additional information about United can be found at www.ucbi.com.