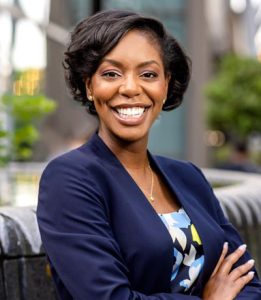 United Community Bank is excited to strengthen its legal team with the addition of experienced litigation attorney Cashida Okeke as employment counsel. In this role, Okeke will primarily be responsible for advising United on employment matters and supporting human resource’s initiatives.

“We are thrilled to bring someone as experienced as Cashida to our team,” said Melinda Davis Lux, Executive Vice President and General Counsel at United Community Bank. “She has extensive experience in representing employers on various complex matters and as our bank continues to grow, we will benefit greatly from her strategic recommendations and sound judgment.”

Okeke comes to United from Jackson Lewis P.C., where she provided employment law advice and counsel on workplace training and investigations, pay equity matters as well as revisions to employee handbooks. She defended employers against various administrative charges brought under the Equal Employment Commission and South Carolina Human Affairs Commission. In 2021, Okeke was named one of The Best Lawyers in America, “Ones to Watch: Litigation – Labor and Employment.”

“I’m excited to join a team that has such a strong commitment to its employees,” said Okeke. “I look forward to collaborating with my new colleagues to represent United and help strengthen the bank’s growing presence.”

Okeke received her Juris Doctor from the University of South Carolina School of Law in 2014 where she was a CALI Award recipient for trial advocacy, served as the associate editor in chief of the ABA Real Property, Trust and Estate Law Journal, and served on the executive board of the Black Law Students Association. She received her bachelor’s degree in American political science from Duke University.

United Community Banks, Inc. (NASDAQGS: UCBI) provides a full range of banking, wealth management and mortgage services for relationship-oriented consumers and business owners. The company, known as “The Bank That SERVICE Built,” has been recognized nationally for delivering award-winning service. At March 31, 2022, United had $24.4 billion in assets and 198 offices in Florida, Georgia, North Carolina, South Carolina and Tennessee, along with a national SBA lending franchise and a national equipment lending subsidiary. In 2022, J.D. Power ranked United highest in customer satisfaction with consumer banking in the Southeast, marking eight out of the last nine years United earned the coveted award. United was also named one of the “Best Banks to Work For” by American Banker in 2021 for the fifth consecutive year based on employee satisfaction. Forbes recognized United as one of the top ten World’s Best Banks in 2022. Forbes also included United on its 2022 list of the 100 Best Banks in America for the ninth consecutive year. United also received ten (10) Greenwich Excellence Awards in 2021 for excellence in Small Business Banking and Middle Market Banking, including national awards for Overall Satisfaction and Likelihood to Recommend. Additional information about United can be found at www.ucbi.com.