In medicine and emergency operations alike, experienced practitioners pass down knowledge in a way that expands upon classroom learning. The established surgeon teaches the young resident who in turn teaches the fresh-faced medical student. Experienced firefighters show new fire academy graduates how to deal with real-world situations. There’s a well-worn schedule for bringing the novice up to speed and giving him or her more responsibility.

But how do you widely disseminate knowledge when you’re in the middle of creating something new?

Normally you wouldn’t. In the midst of a pandemic, though, it becomes important to share innovations as they occur. That’s not so easy, but it became a lot easier for MUSC Health’s ambulatory safety and emergency manager when two locals from the National Park Service and Clemson University School of Architecture raised their hands and said they wanted to help. 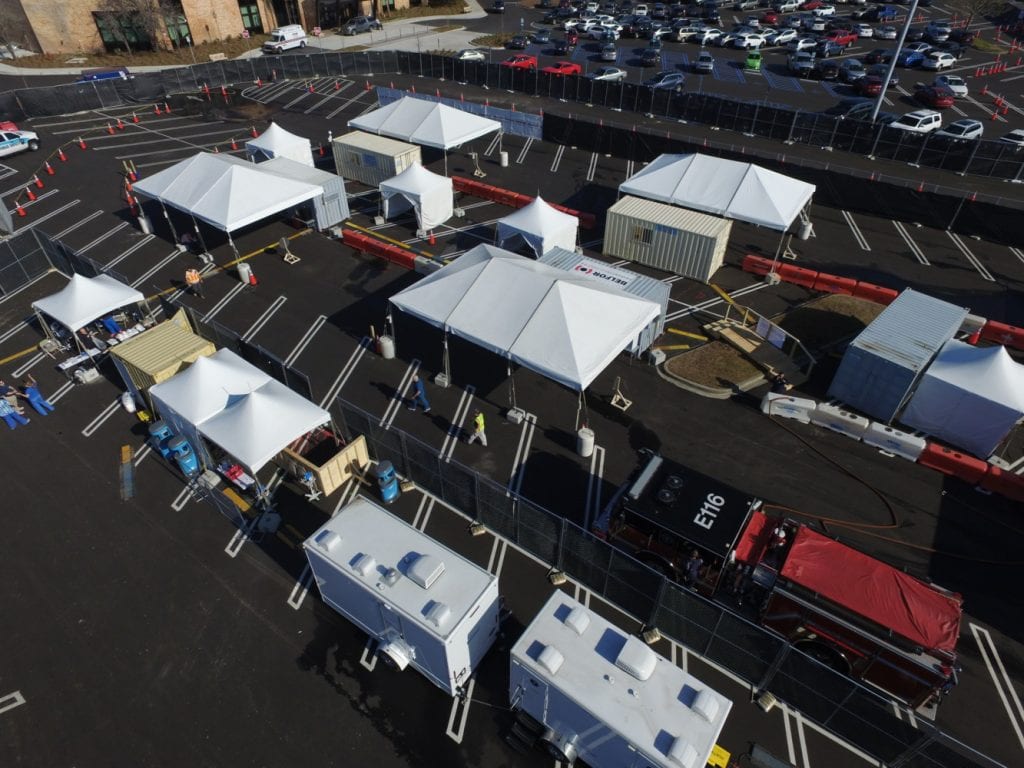 An overhead image of the specimen collection site in West Ashley.

In his role as ambulatory safety and emergency manager, Erik Modrzynski handles everything from water leaks to hurricane prep to the occasional wayward car crashing through a clinic. He began thinking about how to create a mass testing site for COVID-19 in January, when it began to look possible that the novel coronavirus could affect the U.S. When MUSC Health leaders decided the time had come to set up such a site, he was told on a Sunday in March to have everything ready to go by Wednesday.

In the meantime, Simeon Warren had come to Charleston on March 9 to give a lecture and found himself ordered to remain in place indefinitely as cities and states began to shut down. Warren wasn’t new to Charleston – he’s the founding dean of the American College of the Building Arts, and the lecture he was giving was about an ongoing program to document gravesites at the Circular Congregational Church. But in February, he had started a new job in Louisiana at the National Center for Preservation Technology and Training, part of the National Park Service, and he was in the process of moving from Charleston to Natchitoches when he returned for what he thought would be a quick trip for the lecture.

Stuck working from home, Warren wondered if MUSC needed help constructing temporary buildings for treatment purposes. He thought his background, plus that of colleagues at the Clemson Architecture Center in Charleston, could prove useful.

“I decided to reach out to all three organizations just to ask the simple question, ‘Is there anything we can do to help support MUSC in regard to developing COVID protocols?” he said.

Warren emailed Mary Mauldin, Ed.D., executive director of the MUSC Office of Instructional Technology and Faculty Resources. Mauldin had worked with ACBA in the past to help its professors, who are first and foremost practitioners of their crafts, to hone their teaching skills. Mauldin, in turn, connected Warren to Modrzynski.

Modrzynski welcomed Warren to the parking lot of the former Citadel Mall, now called Epic Center, where MUSC Health had just opened its specimen collection site. The almost 94,000-square-foot site allows people who have obtained a doctor’s order for COVID-19 testing to drive in and get tested while remaining in their cars. MUSC Health was the first facility on the East Coast to offer drive-up testing and the first in the nation to combine a telehealth screening to qualify patients for the testing with the drive-up specimen collection.

“One of the things that Simeon asked was, ‘Has this ever been done before, and where did you get the plans for this?’ And I think I put it bluntly: ‘Simeon, we’re flying by the seat of our pants here, making sure that not only is our care team safe but our patients are safe,’” Modrzynski said.

Warren realized that what MUSC Health needed help with wasn’t construction but documentation of how it had created a specimen collection site.

He reached out to David Pastre, a senior lecturer at the Clemson University School of Architecture who coordinates the Architecture + Community Build program in Charleston. Pastre and Warren had known each other for years because their programs used to be housed in the same building. Pastre’s students – six in graduate architecture, four in undergraduate landscape architecture and two in undergraduate architecture – had spent the first part of the semester working with the Charleston Parks Conservancy and neighborhood groups to develop plans for improvements to the West Ashley Greenway, including resting points and signage. They were supposed to get to work on building the improvements after they returned from spring break on March 23, but the pandemic forced a halt to all in-person classes and projects.

Pastre wasn’t sure how he was going to structure the remainder of the course when Warren called to recruit him into helping with documentation of the specimen collection site.

Pastre and Warren met with Modrzynski on site to take photos and drone footage that was then relayed to the students, who were tasked with collaborating virtually to develop a document that could be shared.

Modrzynski had already started such a document, but his was geared toward fellow emergency management professionals. It was very thorough in documenting safety procedures but didn’t give a sense of how the site worked as a whole, Pastre said. That was where his students would step in, along with some help from graphic designer Will Bullock.

“My hope is that the outcome of this project is there’s a document that can be shared,” Pastre said. “By sharing it, you’re going to make testing facilities safer and easier and less expensive to build and manage so that testing can reach further into communities that need it.”

The resulting document, which is currently in version 1.5, showcases the thought that Modrzynski and AJ Kean of Belfor, a disaster recovery company that works with MUSC, put into the site.

Early on, it was agreed that people potentially infected with the novel coronavirus should be directed away from MUSC Health’s clinics and emergency rooms so as to avoid infecting staff and other patients. Even a dedicated clinic space – for example, the old Children’s Hospital Emergency Department, which had recently been vacated – wasn’t practical, Modrzynski explained. Each exam room would have to be thoroughly decontaminated after every patient, a labor intensive and risky task. Instead, a drive-thru operation, in which patients remained in their own cars, would allow the staff to test more people.

That left the question of where to send them. One of the ideas floated involved erecting a tent on the Horseshoe, a gathering spot in the middle of MUSC’s downtown Charleston campus. But Modrzynski had been asked to create a site that could test anywhere from 50 to 600 people per day – and there was simply no way the streets around MUSC could handle an additional 600 cars each day.

Instead, MUSC Health partnered with mall owners, Richard and Ginger Davis, to take over a portion of the parking lot. Modrzynski used his background in firefighting to design the green, orange and red zones within the site that would indicate where personal protective equipment must be worn. But as he designed the traffic flow, Modrzynski turned to two icons of American culture – Chick-fil-A and NASCAR.

He said he was out with a friend and thinking about how to get cars through the registration process quickly, safely and efficiently when they passed a Chick-fil-A. A light bulb went off in his head.

“They spent millions of dollars trying to figure it out, and we got it for free just by going by and getting a chicken sandwich,” he jokes now.

Once people pass through the registration area, they enter the testing area. Here, Modrzynski thought about how racers come in for pit stops. A racer doesn’t have to wait for the car in front of him to finish before he can re-enter the race. Similarly, at the testing site, there is a drive lane and six “pit stops” at testing pods. A patient is directed to a specific pod and can leave once the specimen collection is complete by re-entering the drive lane without waiting for other patients to finish.

On its busiest day so far, the site handled 475 patients in their cars, Modrzynski said.

Pastre’s students have documented all of these details. From the placement of stop signs and security personnel to the procedure if someone should faint while wearing personal protective equipment, the document is a thorough look at how the site runs.

Warren said he hopes the document can be disseminated to share what MUSC Health has done as well as to gather feedback from what other institutions have done that could be incorporated into the document.

“By documenting this moment in time, it allows us to come to learn this process of how we deal with testing,” he said.

But the students have even gone beyond documenting the original drive-thru testing site.

“From that, the students started to see opportunities to improve the process of testing and to spread it into different areas, whether it is walk-up testing or other methods of drive-thru,” Pastre said.

This will be phase two of the documentation process, which will delve into walk-up sites, for people without cars, and adaptive reuse of existing infrastructure, whether it be parking garages, schools or other facilities, Modrzynski said.

While the original task was to set up testing as quickly as possible in a way accessible to most in the Charleston area, MUSC Health is acutely aware of disparities that exist – such as lack of transportation or living in rural areas – that challenge access to this testing.

“We’re actually putting some access measures in place now with the pop-up testing MUSC is doing throughout the state,” he said.

MUSC Health has begun offering pop-up testing in smaller communities in the Charleston area as well as rural areas like Mayesville, Hartsville and Santee.

It’s been an exciting collaboration that shows how designers, builders and architects can support health care facilities in emergency situations, Warren said.

“We design and build buildings, but what happens when you have to design something that happens within two weeks? And how do you create with no materials? Design in the moment? The most important thing in this process was the realization that as a community, we can work together. Even in times when you’re stuck in a house and being told to stay, we can actively do something to help support people who are in the midst of an emergency,” Warren said.

Modrzynski said he would like to share this hard-won knowledge and the process behind it. Ultimately, he said, he hopes that the pandemic shakes people loose from ingrained ideas and prompts more innovation. 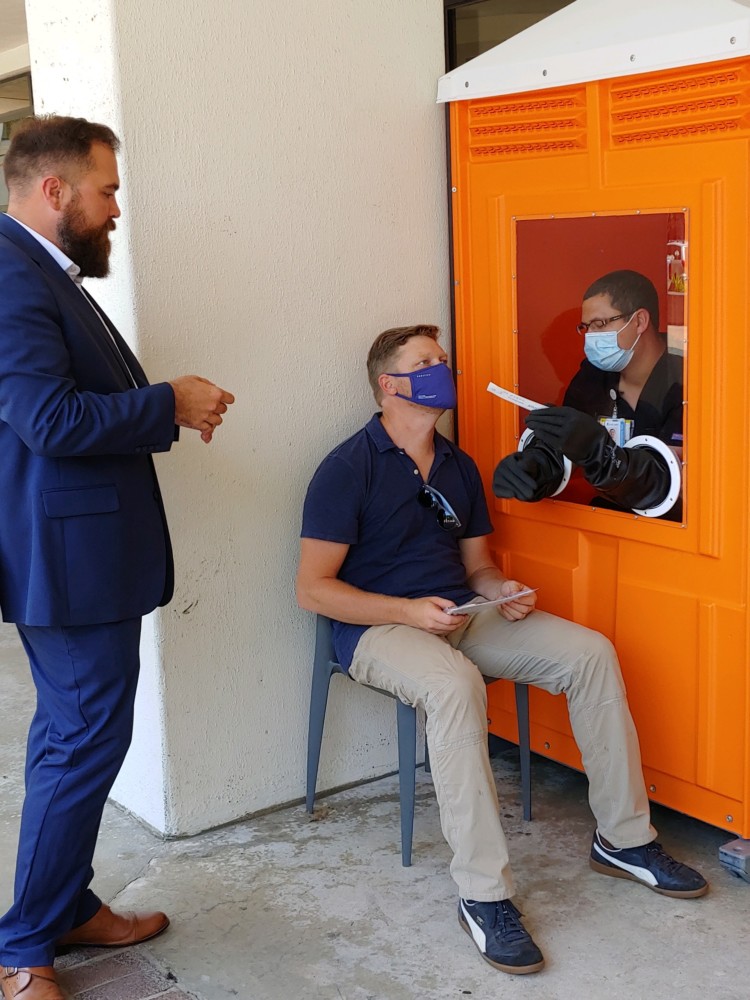