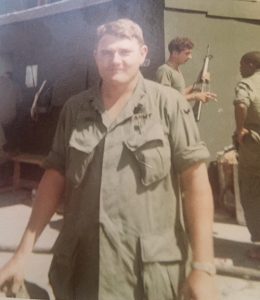 Tillman Abell, an ROTC-trained Army officer from Wofford College, took command of a platoon with the 9th Infantry Division in the Mekong Delta on March 28, 1968, when the Tet Offensive was still raging throughout South Vietnam.

He would stay there, engaged in frequent combat, until he was seriously wounded on June 10.

Abell will talk about his harrowing experiences as a part of the Mobile Riverine Force at the South Carolina Confederate Relic Room and Military Museum at noon on Friday, April 29. The lecture, part of the museum’s monthly Lunch and Learn series, is free and open to the public.

Abell first arrived in Vietnam in September 1967, and spent his first few months with the Riverine Force helping supply the combat units in the area by helicopter and boat. That was hairy enough, as the Mekong Delta was “infested” – a word he hesitates to use now, although it was how U.S. soldiers described it then – by “what we called Main Force Viet Cong.” That was the soldiers’ term for the better-organized, better-equipped enemy forces they faced, as opposed to smaller local insurgent groups.

“We ran into them quite a bit,” he remembers.

The Mobile Riverine Force was a joint Army/Navy force that made up a substantial part of the U.S. brown-water Navy during the Vietnam War. A large part of its mission was to keep the rivers in the delta open and safe for shipping. The primary base was at Đồng Tâm Base Camp. But they moved around a lot – Abell says they were called “Westmoreland’s Wanderers.”

Mobility was provided by the Navy, which provided LSTs as main craft, although when the soldiers went on the attack, they rode in smaller landing craft “like what you see in a John Wayne movie.”

He says the U.S. Marines originally wanted the job, which involved “typical infantry tactics, adapted to that swampy environment.” But the leathernecks were too busy well to the north, so the assignment fell to the Army’s 9th Division, which was reactivated for the purpose.

“We tried to use armor as much as we could,” he says. “But roads and bridges weren’t good enough for tanks,” and the best they could do was ride in smaller, lighter armored personnel carriers.

That was because of the mud, which is one of the main things Abell remembers about that time and place. “It was a terribly swampy environment,” he says. “I felt badly for the Vietnamese who had to live there permanently.”

In March 1968, he took command of 2nd platoon of C company, part of the 3rd battalion of the 60th Infantry Regiment. “We were constantly under sniper fire,” and experienced “some very fierce firefights.”

On June 10th, his platoon was “pulling security for an artillery unit.” He was going back toward the river to check on expected supplies when an enemy booby trap – of the sort that were everywhere in that area – “blew up behind me, collapsing my left lung.”

The wire-activated booby trap involved a U.S.-made fragmentation grenade. The shrapnel also hit him in his knee and “as Forrest Gump would say, my but-tocks.”

He was taken aboard a ship where medics put in a chest tube to deal with the damaged lung. From there he was moved to Saigon, then Japan and finally home.

After returning home, he eventually became a U.S. history teacher. He taught in Orangeburg County District 4 from 1971-2006. He then taught for a time at a private school in Blackville. He retired, but still substitutes. “I enjoy it,” he says. And sometimes he tells the students about his experiences in the war.