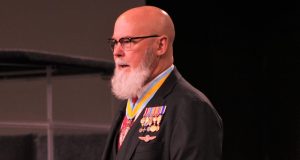 “It’s a heavy burden speaking on Veterans Day because I feel like I speak on behalf of a number of people who are far better than me, who’ve had far more meaningful experiences in our military, many of whom paid the ultimate sacrifice,” said Mullikin before those gathered at CIU, Nov. 11, where he earned his PhD in Organizational Leadership last year. “So it’s a little humbling and heavy that I greet you today. This is a very important day.”

Mullikin encouraged those gathered to “never give up on your passions” and always do what is right. He spoke at length about the nation having been founded on Biblical principles and the importance of protecting that Biblical foundation. He also pointed to South Carolina’s uniqueness as a state infused with a military history and tradition like no other.

Speaking about the American Revolution, Mullikin said: “Freedom was won right here! Right in the vicinity of the ground we stand on. We had more battles [fought here] in South Carolina for freedom than the rest of the country combined. Not more than North Carolina, or more than Georgia or more than Virginia or more than New York, but more than all of the rest, right here.”

He added: “It was a burning passion for freedom that led men and women just like you to fight the mightiest army on the earth at that time.”

Mullikin also spoke at USC’s 14th annual Veterans Day Breakfast. At USC he earned both his undergraduate degree and a law degree.

Mullikin today serves as an energy-environmental attorney, a university professor, chair of the S.C. Floodwater Commission, and a world-renowned global expedition leader: Enough ‘hats,’ in fact, that would inspire Governor Henry McMaster to refer to Mullikin as “the most interesting man in the world,” a play on the Dos Equis national advertising campaign of several years ago. McMaster also tapped Mullikin to lead the Floodwater Commission in 2018.

Mullikin’s military service transcends his uniformed service in both the Army and the State Guard, a component part of the S.C. Military Department (SCMD) which also oversees the S.C. Army National Guard, the S.C. Air National Guard, and the state’s Emergency Management Division. He also served in the SCMD’s Joint Services Detachment as both a legal officer and an executive member of the Counterterrorism Task Force (aka Counterterrorism Advisory Team), and in a civilian capacity as Special Assistant to Chief Prosecutor of Military Commissions, overseeing the trial of Khalid Sheik Mohammed and the four 9/11 co-defendants.