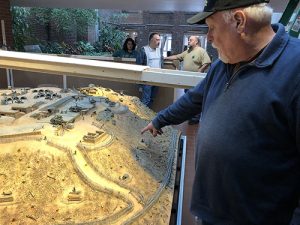 It’s regarded as one of the bloodiest fights of the war. They lost 139 men, and hundreds of others were wounded. And no one back home even knew about it. It happened in 1970, at a time when the Pentagon wasn’t saying much about battles and losses. “Nobody ever heard of Ripcord,” Craig remembers.

The folks back home will know more on Saturday, March 26. That’s when the South Carolina Confederate Relic Room and Military Museum will officially present its diorama of Fire Support Base Ripcord, designed and constructed by the Wildcat Chapter, Armor Modeling and Preservation Society. (The display has been at the museum for two years, but the original unveiling event was postponed due to COVID.)

The meticulously detailed diorama shows the entire base and the hill it was on. It’s the first piece of the major Vietnam exhibit that will open fully in the fall. The event, which will run from 10 a.m. to 4 p.m. at the museum at 301 Gervais Street, is free and open to the public.

Craig and other veterans of the Battle of Fire Support Base Ripcord will speak about their experience at 11 a.m. At 2 p.m., the builders of the diorama will tell how they did it – a painstaking task that took two years. Then at 3:30, former Lt. James Lawrence, a Citadel graduate and veteran of the U.S. Army’s first big battle in the war – the one featured in the film “We Were Soldiers” – will talk about his role in that action, and also speak to the significance of what happened at Ripcord.

Ripcord was located several miles south of “Hamburger Hill” in the A Shau valley, where soldiers of the same division had sustained heavy losses in May 1969. That battle was the subject of a Hollywood movie, unlike the one a year later.

Fierce fighting against the North Vietnamese Army occurred in and around Ripcord between March 12 and July 23, 1970. Three Medals of Honor and six Distinguished Service Crosses were awarded to participants for actions during the final 23 days in July.

Specialist Van Hout was a member of Bravo Company, which flew into Firebase Ripcord on April 1, after Company A had failed to secure the position in March. He was carrying an M60 machine gun. “We just got hammered with mortars,” he remembers. “We had expected a nice, clean helicopter assault. It was anything but.”

He and his group were told to dig in. As they tried, a mortar hit within 20-30 feet away, throwing “all kinds of debris into my face,” including, “a piece of shrapnel in my jaw, which got my attention real good. I didn’t raise my head more than a foot the rest of the day.”

Another mortar round had killed Terry Radcliff, acting platoon sergeant at the time. He was from California, and “looked like a Beach Boy, just a great guy. It was heartbreaking; you don’t know what kind of future he may have had.” It was the first man Craig had seen killed in action. Plenty more followed him.

That was the first of three times Van Hout was wounded during the battle. He wasn’t evacuated. “I did the old John Wayne thing, rubbed some dirt on it and moved on.”

Bravo company had to abandon the position, joining Alpha on a nearby hill. Two weeks later Charlie Company secured Ripcord. Bravo Company was rotated onto Ripcord in May to provide perimeter security.

One evening during a “mad minute” – when the soldiers were ordered to fire off weapons as “kind of a morale booster” – someone in a hole next to Craig’s threw a grenade that hit a nearby steel stake. “It bounced back, and shrapnel hit me in the shoulder.” He got bandaged at an aid station, and was flown out the next morning. He ended up at an Air Force hospital in Cam Ranh Bay. They didn’t try to remove the metal fragment because it was in too deep.

“I spent two weeks healing up from that.”

Before returning to action, he was sent to participate in the Kit Carson Scouts program, which involved training defectors from the Viet Cong and NVA to serve on the South Vietnam side. Then, he and the “scout” he was paired with were flown back to Ripcord.

They were there on July 18, when the Chinook helicopter that can be seen hovering over the firebase in the diorama got shot down and crashed atop one of the 105 mm batteries, starting a fire that spread to the ammo dumps and “everything just started exploding all over the place – like the 4th of July, except it was quite deadly.”

“We were basically unable to defend ourselves at that point,” so the order came a few days later to abandon Ripcord. He and his team were ordered to lay down a field of fire as the helicopters came in to get them. Then, he was hit by another enemy mortar round.

“Shrapnel went though my helmet, and knocked me to the ground,” he says. A field dressing was applied to his head to stop the bleeding, and he went looking for a medic. “All the medics had been extracted already.” He eventually caught a helo out, but he couldn’t get into a hospital for days, because “the hospitals were full.”

He was sent to Da Nang to be treated. He had been hit by a piece of mortar “probably as big as the tip of my little finger, but it had shattered into 14 or 15 slivers.” But they hadn’t penetrated the skull all the way, so he counts himself fortunate.

After a couple more weeks, he was returned to duty, but not to Ripcord. He’s never been back.

“They could put a five-star hotel on top of Ripcord, and I ain’t going,” he says. But he and others will be at the Relic Room on the 26th to tell you what it was like.