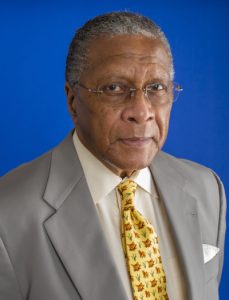 Every October, some of the best and most successful barbecue cooking teams travel to Southeastern Tennessee to compete for the coveted title of The Jack Grand Champion.

While the cooking competition is cutthroat, it is also difficult to qualify as a judge. Judges must be certified through the Kansas City Barbeque Society, a nonprofit organization dedicated to promoting and enjoying barbecue, which sanctions more than 500 barbecue contests worldwide.

Davis was working as a frequent op-ed columnist for USA TODAY when he started as a judge. In 1992, three years after the championship began, the Jack Daniel’s Distillery published an article looking for qualified judges. Prospective judges were asked to submit an essay extolling their barbecue expertise and judging interest. Davis entered and was selected from a national pool.

At the event, judges are treated like royalty, Davis said. Judges are provided transportation and lodging accommodations. On judging day, they are honored and given the opportunity to converse with culinary experts and television food show celebrities who have become a staple at the event, such as Guy Fieri, the host of Food Network’s Diners, Drive-ins and Dives.

Davis looks forward to judging the Jack Daniel’s World Championship Invitational Barbecue every year. He has a lot of appreciation for delicious food, as he is a frequent chef at fundraising events around the country. His own barbecue ribs were featured on the menu at one of the four-star restaurants in Flint, Mich., in 1973 while he was reporting for a local television station. In 1999, when he was a visiting journalism professor at the University of Nebraska-Lincoln, CBS News featured his judging prowess as part of its Evening News segment.

As a gourmet chef, his specialties are Cajun, Southwest, Italian and French cuisines. He credited his passion for good food to his seven siblings, his mother and his grandmother, who were excellent cooks, and his experiences dining in some of the best restaurants in the U.S. and around the world as a journalist and journalism educator.

Davis’ trailblazing career spans more than 50 years. A Columbia, S.C., native, Davis earned a bachelor’s degree from North Carolina A&T State University in Greensboro, N.C. He was the first African American television reporter in the Carolinas, and he’s worked with WIS-TV in South Carolina, KNBC-TV in California and WRC-TV in Washington. He has won multiple awards throughout his career, and earlier this year, he was included in the Marquis Who’s Who Biographical Registry for excellence in journalism and education.

The 2022 Jack Daniel’s World Championship Invitational Barbecue will be held Oct. 14-15. This year, 85 championship teams will showcase their flavorful and possibly award-winning barbecue. Teams will travel from all over the U.S. to compete, as well as international teams from 18 countries, including Australia, Canada, Germany, Sweden and the U.K. To qualify for entry, teams must win a state championship with at least 25 teams or a competition of 50 teams. Teams also may win one of the premiere barbecue competitions that qualify a team for an automatic entry.

Each year, more than 50,000 barbecue aficionados flock to Lynchburg, Tenn., which is best known as the location of Jack Daniel’s whiskey distillery. The weekend features great music, fun events, eight individual category competitions and lots and lots of barbecue. It has been estimated that competitors smoke up to 3,900 pounds of meat in less than 24 hours.

Voorhees University, founded by Elizabeth Evelyn Wright in 1897, is a private, coeducational institution affiliated with the Episcopal Church and the United Negro College Fund. The university is accredited by the Southern Association of Colleges and Schools Commission on Colleges to award baccalaureate and graduate degrees. Its mission is to produce highly qualified graduates who coalesce intellect and faith in pursuit of life-long learning, healthy living, the betterment of society, and an abiding faith in God. U.S. News & World Report has ranked Voorhees as a #1 best value, #3 in social mobility and #33 among regional colleges in the south in 2022-2023; and #26 among Historically Black Colleges and Universities, nationally. Additional information about Voorhees University can be found at www.voorhees.edu.