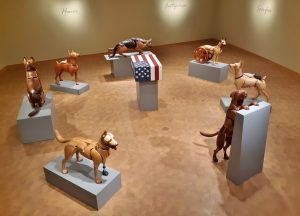 “War Dogs: Never Above You, Never Below You, Always Beside You” delivers a powerful display of the heroism, service, and history of America’s military working dogs in the newest exhibition opening Saturday, October 30, 2021, at the Upcountry History Museum, a Smithsonian affiliate, and running through Sunday, February 27, 2022.

Since the American Revolution, military working dogs have served all branches of the United States Armed Forces. This unique exhibition not only highlights the significant involvement of these four-legged warriors in the military but honors the important role they and their handlers play in serving and protecting countless lives in conflicts across the globe.

Featuring life-sized, hand-carved wooden sculptures designed and created by Ohio Master Craftsman James Mellick, War Dogs offers a poignant look at stories of perseverance, bravery, and sacrifice through eight Wounded Warrior and two Canine War Dog sculptures. These distinctively creative tributes provide a vivid visual that captures the emotional dynamics of the incredible tandem of human and canine warriors in service – and sacrifice – of their country, as is conveyed in the story of Lucca, a Marine Corps war dog. She conducted more than 400 missions during two deployments to Iraq and one to Afghanistan. On one mission, however, Lucca lost her leg and suffered severe burns, but there were never any human casualties under her watch.

“I am moved by the physical and emotional sacrifice by the men and women of the United States military,” said Mellick. “I want to pay tribute to the soldiers who served with great sacrifice by creating the sculptural allegory of wounded warrior dogs who were the soldier’s best friend and companion in battle.”

In addition, the exhibition showcases a collection of objects and combat art on loan from the National Museum of the Marine Corps, the United States Navy, and the United States Coast Guard, as well as from private collections, all of which help round out a more complete presentation of these dogs and their handlers at work around the globe from World War II, Vietnam, Iraq, and Afghanistan.