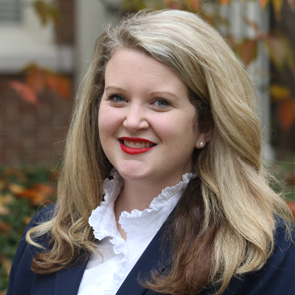 The award recognizes members of the Bar who have demonstrated substantial dedication to the furtherance of the art and techniques of trial and appellate advocacy in South Carolina, outstanding and exemplary skill and conduct in their practice of advocacy, and have devoted substantial time and effort to the education and training of lawyers. Whitney is the first woman to receive the award.

While practicing law for less than a decade, Whitney has tried several medical malpractice cases to verdict with the partners of McGowan, Hood & Felder, LLC, including obtaining a verdict of $13.75 million, and has been associated by outside counsel to assist with numerous complex motions and trials. Additionally, Whitney has served as lead appellate counsel on more than thirty appeals—with issues ranging from constitutional challenges to corporate governance to novel issues— before the South Carolina Court of Appeals and South Carolina Supreme Court.

In nominating Whitney for this award, her colleagues shared that Whitney’s story is like that of the three masons, “Whitney’s passion for the law and her legal work shines through her in every interaction she has—whether she is working long hours on a brief or taking one of her many mentees to coffee. Whitney views her role as an advocate with great reverence and lives each day with one goal in mind—to help build legal cathedrals that will ensure justice for generations.”

She is a proud graduate of Presbyterian College (07) and the University South Carolina School of Law (10). Prior to joining McGowan, Hood & Felder, LLC, Whitney clerked for the Honorable Aphrodite K. Konduros, Judge of the South Carolina Court of Appeals, and later as a law clerk for the Honorable Kaye G. Hearn, Justice of the Supreme Court of South Carolina. Additionally, Whitney has served as adjunct professor at Presbyterian College, where she taught constitutional law.

She is highly active in her community serving on the Board of SC Appleseed Legal Justice Center and the SC Bar Foundation and supporting organizations such as MIRCI, who work with our community’s most vulnerable population.