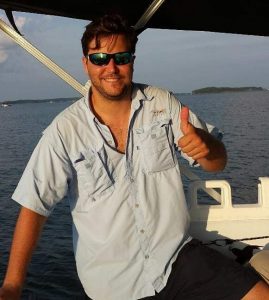 Lake Murray is known throughout the state as an incredible destination for families to explore the outdoors. One of the most exciting adventures is to witness the Purple Martin roost Bomb Island that only happens a few months a year. An authority on the outdoors and “winged things,” Wingard’s Market’s Zach Steinhauser is offering boat tours for people to experience the sight of more than one million birds claiming the uninhabited piece of land on the lake.

Tours are nightly Monday – Friday starting on July 5 and ending on August 27 and depart at 6:30 p.m. There will also be four Saturday sessions, leaving at 5:30 a.m. Explorers can book their tickets today, and with a cost of $40 per adult and $35 for children for evening tours and $60/$55 for morning tours, it is sure to be one of the most unforgettable events of any family’s summer.

Wingard’s Naturalist, Zach Steinhauser, is a licensed United States Coast Guard Captain who has been all over the United States and Brazil to study this songbird.

“I have lived in this area since 2005 but visited here all my life and became fascinated with the Purple Martin at a young age and I often wondered why this bird chose to stop here every night over the summer,” Steinhauser said. “It is the perfect layover to rest as they are making the journey south to spend the winter in South America. This island is the largest roosting site in North America, and I love sharing my knowledge with people interested in this phenomenon. Every night for me is almost like a new experience.”

While not endangered, the Purple Martins have faced about a 40 percent decline as a species in the last 50 years because people have steadily stopped putting up housing and provided nesting habitat for Martins to bring in future generations.

“One of my goals for these trips is to raise awareness to people about bringing Purple Matins back to South Carolina,” Steinhauser added. “I cannot imagine if my kids or my grandkids will not be able to experience this, and the most effective way to conserve and repopulate Purple Martins is by educating and showing people how easy it is for them to make a difference.”

Wingard’s is committed to beautifying and to sharing fresh, local produce with our community. Wingard’s Market joined the ranks of the horticulture industry’s top local garden centers when it was named one of Today’s Garden Center magazine’s Revolutionary 100 Garden Centers for 2015 and named one of the Top 100 Garden Centers by Garden Center Magazine in 2017. Our customers are encouraged to visit the Gift Shoppe and Fresh Produce Market or take a stroll under century-old pecan trees through the Garden Wonderland. Follow us on Facebook and Instagram!