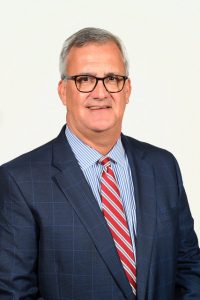 Wofford College has named Calhoun Kennedy its new vice president for advancement after a national search. Kennedy had been serving as interim vice president and executive director since August 2021.

“Calhoun has proven himself as a valued member of the college’s senior leadership team,” said Dr. Nayef Samhat, Wofford’s president. “He has led the college’s advancement team during a difficult period and has ideas for the future that focus on alumni engagement and education.”

During Kennedy’s tenure as interim vice president, he instituted departmental fundraising training and held donor listening sessions. He has improved internal communications with the advancement team and is leading the team through a thorough assessment of fund agreements, donor reports and best practices.

“I look forward to continuing my service to an institution that I deeply care about,” said Kennedy, a 1989 Wofford alumnus. “This is an exciting time to be on Wofford’s campus, and I look forward to helping future generations of Terriers experience the college while working alongside alumni, faculty, staff and friends to support all that makes Wofford special.”

Kennedy served as associate vice president and executive director for advancement since 2003. His civic involvement includes service as a trustee for the Hammond School in Columbia, Scoutmaster with the Boy Scouts of America, president of the Palmetto Baseball League and board service with the Spartanburg Area Conservancy (SPACE).

Wofford College, established in 1854, is a four-year, residential liberal arts college located in Spartanburg, South Carolina. It offers 27 major fields of study to a student body of 1,775 undergraduates. Nationally known for the strength of its academic program, outstanding faculty, study abroad participation and successful graduates, Wofford is recognized consistently as a “best value” and for its commitment to student success and accessibility for low- and middle-income students. The college community has 12 sororities and fraternities as well as 19 NCAA Division I athletics teams.