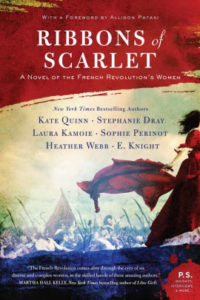 Converse College is hosting two of the writers of Ribbons of Scarlet, Kate Quinn and Laura Kaomie at its upcoming author talk on October 2. The free community event begins at 6:30 p.m. in Daniel Recital Hall (located in Blackman Music Hall), followed by a reception and book signing at 7:30 p.m. in the lobby of Blackman Music Hall.

In this epic novel, six bestselling and award-winning authors bring to life the hopes, desires, and destinies of princesses and peasants, harlots and wives, fanatics and philosophers—six unforgettable women whose paths cross during one of the most tumultuous and transformative events in history: the French Revolution.

Ribbons of Scarlet is a timely story of the power of women to start a revolution—and change the world. In late eighteenth-century France, women did not have a place in politics. But as the tide of revolution rises, women from gilded salons to the streets of Paris decide otherwise—upending a world order that has long oppressed them.

The launch of this new novel complements the celebration the upcoming 100th anniversary of the ratification of the 19th amendment allowing American women the right to vote, and Susan B. Anthony’s 200th birthday, recognizing the real-life heroines during the French Revolution who helped to birth the freedoms enjoyed today.

Determined to Soar, a grassroots effort to boost women voters and to encourage participation in the various activities and events centered around the 2020 election year, has partnered with Converse to bring this event to the community.

More information about the event can be found on the event page of Converse’s website.

Converse College was founded in 1889 by citizens of Spartanburg, S.C. who aimed to create an educational experience that enables women “to see clearly, decide wisely, and act justly.” Today, Converse is a visionary doctoral university pushing beyond traditional boundaries to make a quality educational experience available to every student who seeks it. Converse College’s mission is to help students develop their unique voice, a sense of value, and a vision for the future. For more information, visit www.converse.edu.