Part Three of a Series on the Life of American Hero Major James Capers, Jr.

He finally convinced the girl of his dreams to marry him. The family gathered for the wedding.  The preacher was ready to pronounce them husband and wife. But there was one problem: the groom couldn’t find the marriage license. Must have fallen out of his coat pocket. He was scared to tell his bride and certainly didn’t want to tell his future mother-in-law. He explained the situation to the preacher and begged him to go ahead with the ceremony.  The preacher didn’t buy it and cancelled the wedding. No nuptials that night. Everyone went to bed upset. 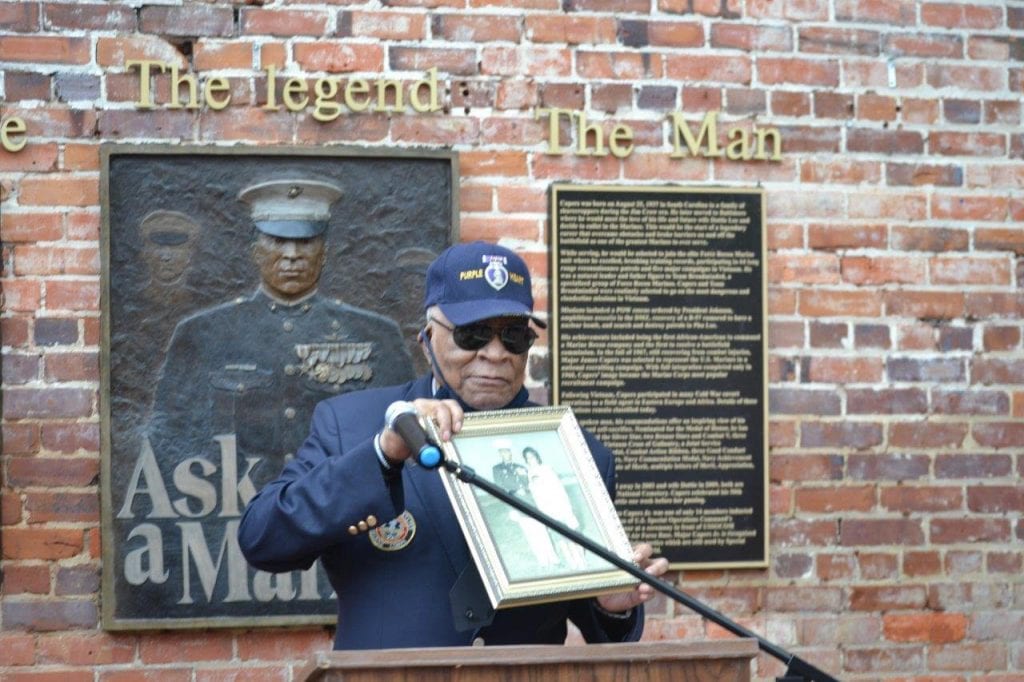 Major James Capers, Jr. was honored in his hometown of Bishopville, SC. Veterans from all over the country participated in a parade with Capers as the Grand Marshall. A bronze relief of the Ask A Marine Poster was dedicated as part of Bishopville’s Wall of Heroes.

By the time Capers married the girl of his dreams, he was already achieving success in the US Marines. But Capers is quick to acknowledge that his story could have turned out very differently had it not been for what seem to be the pillars of his success:  his solid marriage, his love of learning, and the encouragement and sacrifices of his parents. He turned out to be a bigger-than-life kind of hero thanks to lots of ordinary people who were heroes in their own way.

Capers lived his adolescent years in Baltimore where teens up to no good filled the streets.  But Capers steered clear of trouble and lost himself in the world of books at the Pratt Free Library. Enoch Pratt, a successful business man who donated a million-dollars to establish a library, believed that all people, rich and poor and black and white, should have access to books.  Capers stayed in the library and out of trouble.  Without the generosity of Enoch Pratt, staying on the straight and narrow might not have been so easy.  Enoch Pratt was a businessman and a philanthropist, but if the definition of a hero is “someone who saves others,” he was also super hero to thousands.

Capers, Jr. enjoyed a world of books and literature that his father would never experience. What Capers, Sr. lacked in formal education, he made up for in wisdom and love.  He constantly encouraged his son to dream big saying, “If it can be done, imagine yourself as the one to do it, and it will be so.” Good parents who overcome obstacles and make sacrifices for their children and encourage them to live their best lives are nothing short of heroic.

It’s not every day that you get the chance to watch a screening of a documentary about an American hero while that hero sits a few feet beside you.  I had that opportunity a while back.  Major Capers and the Legend of Team Broadminded is a powerful documentary full of heroes, mostly the traditional military variety, but when you reflect upon the life of James Capers, Jr., you see how he was affected by every day heroes.

As I watched the documentary, I could see Major Capers’ face light up each time his wife was mentioned. Theirs was obviously a great, true love. I thought back on the wedding that almost wasn’t. How might things have turned out if the stranger hadn’t made the effort to do the right thing and return the marriage license? That stranger seems like a hero to me.

How would Capers have spent his days without the Enoch Pratt Free Library? Thank goodness a generous businessman created a magical world of books, so a young boy could expand his mind and vocabulary and stay off the streets. Maybe all philanthropists should also be called heroes.

Capers’ father could write his name.  That was about it.  Yet, he told his son he could do anything.  He had the wisdom to fill his son’s mind with this advice: “Imagine that you are the one to the make it to the top.  Imagine it, and it will be so.” All children should be so lucky to have a hero of a father like that.

Major James Capers, Jr. eventually became an American hero.  He would receive the purple heart, the silver star and be nominated for the congressional medal of honor. But along the way his life was full of everyday heroes. Maybe heroes come in all shapes and sizes. Maybe some heroic acts are grand, and maybe some are small. Maybe today, more than ever, we need them all. It’s nice to imagine a world full of people trying their best to be an everyday hero.  Maybe if we imagine it, it will be so.  I think we can choose to make it so.

Click here to read Part One of the series on Major James Capers, Jr. and Part Two here.

Tammy Davis is a teacher and a writer, finding lessons in everyday life.  For photos, videos, audio experiences and more, visit www.tammydavisstories.com.