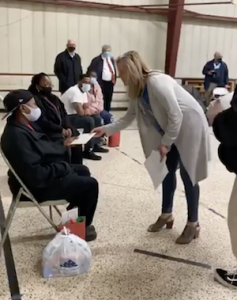 As first reported here on the BUZZ, the fires of December 20th created an opportunity for Laurens County residents to come together to support those in need.

And come together they did!

The afternoon of the fires, Brenda Stewart, owner and publisher of the LaurensCountyBUZZ reached out to Danny Cook, Chief Executive Officer & CFO of Arthur State Bank, Clinton branch to establish the Landau Fire Fund.

News of the fund spread quickly with social media and the response was truly amazing.

“I knew Laurens County residents would respond positively but I was overwhelmed by the generosity we saw in the first three days,” said Brenda Stewart.  “We have received financial contributions from individuals, businesses, mostly local but some even coming from out of state.”

In just three days the Landau Fire Fund generated approximately $33,000.  Those impacted by the fires received a distribution from the fund at the Santa event last Wednesday at First Baptist Church.  Distributions were based on the number of adults and children in the household.

Additionally, the Landau Fire Fund contributed $5,280 towards the funeral of four-year-old Madison Olivia Jeter, who died in the fire.

Contributions continue to come in and the additional funds will be distributed equitably to the families.

After the fund is closed, the BUZZ will publish a list of the individuals and businesses who generously supported this effort.

Laurens County can be proud of this effort!